In 2004, the Pritzker Architecture Prize, which has been in existence since 1979, was awarded to its first woman recipient, Zaha Hadid. In 2012, the jury awarded Wang Shu, leaving out his wife, Lu Wenyu, with whom he co-founded his practice. And in 2013, a petition started circulating requesting that Denise Scott Brown be acknowledged alongside her husband and partner of forty years, who was awarded the prize in 1991. We don’t have to go far back in history to notice that women architects were – are – often silenced.

Yet women, as Storming the Old Boys’ Citadel: Two Pioneer Women Architects of Nineteenth Century North America describes, have been practising architecture for decades. If women still struggle in “a profession that traditionally functioned more like a gentlemen’s club,” one can only imagine what it was like in the late 1800s – the period in which this story unfolds. 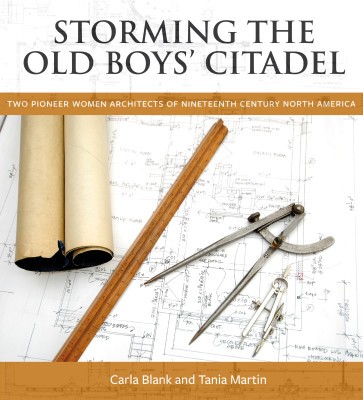 We’re introduced to the lives and work of two female architects working in the United States at that time: Louise Bethune, whose project includes the infamous Hotel Lafayette in Buffalo, New York (not to mention 120 new buildings and renovations), and Mother Joseph (born Esther Pariseau in Saint-Elzéar, Quebec), whose House of Providence (currently Providence Academy), was built in 1873 in Vancouver, Washington. Both were great feats for their time.

Yet despite these achievements, the two women remain “practically non-existent in the nation’s historical record.”

As authors Carla Blank and Tania Martin point out, part of the issue is that architecture was not always defined and legislated as it is today. Architecture programs were not found in Canadian universities until the late nineteenth century (1890 at the University of Toronto and 1896 at McGill). Prior to that, as with any old carpentry business, architecture was simply handed down through apprenticeship. In fact, architects had to knock down a few prejudices to detach themselves from their ancestral connotation (from the Greek word architekton, meaning a “master carpenter”).

For women, another obstacle was the “male-dominated for-profit business enterprise” that did not admit them into its university programs. It took World War II, and a reduced male population, for Harvard and Columbia to finally start admitting female students into their architecture programs in the 1940s. Montreal’s own McGill University started in 1939.

The book reads painlessly and does not restrict its scope to gender-related issues. Quite the contrary: amusing anecdotes abound. We learn that Louise Bethune once collaborated with famed inventor Nikola Tesla on the Cataract Power & Conduit Company’s terminal. And that in its worst years, the Hotel Lafayette – once the majestic stopover destination of President Franklin D. Roosevelt – turned into a quasi crack house under businessman Tran Dinh Truong’s care (or lack thereof) in the 1970s and 1980s.

In Storming the Old Boys’ Citadel we aren’t flooded with technical plans and ceaseless dates, as one might expect from a book on architectural history. Or if we are, we don’t notice them. Rather, we are invited to peek into the lives of the women who worked in this era, learning not only about the nooks and crannies of their buildings – as they transform from architectural marvels to decaying walls – but also about the history of their cities. We exit, at the very end, in the present, contemplating the restorations of recent years.

Books like this one are vital in highlighting what our history notes have left out. They remind us to redefine our views and question our records.

If we need to redefine the history of architecture today, let it include women. mRb