Such a Good Education

Such a Good Education

A review of Such A Good Education by France Théoret 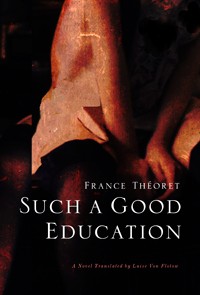 Such A Good Education
France Théoret

Such a Good Education is a work so fluid and compelling that it may be best consumed, like a fortifying drink, in one gulp. This is less because of any dramatic conflict than because of the transformative effect on the reader of its searingly honest and ultimately triumphant narrative voice.

In this story of a girl growing up in 1950s Quebec, told in the first person, author France Theìoret describes with stark, clipped phrases and grim images the impact of religious repression, urban poverty, and social ignorance on a highly intelligent teenager. Evelyne lives in squalor in St-Henri with her numerous siblings, a mother who is gifted but mentally ill, and a callous, voluble father who drags the family into one doomed business venture after another. The “kitchen reeks of rot”; at night, rats roam. The Church governs all aspects
of the family’s life, including perceptions of Evelyne’s burgeoning intellect.

Her parents purchase a seedy bar in which they force the pretty fifteen-year-old, who pours over her Latin at night, to flirt and dance with drunk middle-aged men. In spite of this, notes Evelyne, “I realize that my future will be based on study and knowledge … It is an intuition; all alone I have gained access to another way of thinking.” By keeping silent and apart, observing and working relentlessly, Evelyne begins to carve out a new existence. In one of the book’s many striking passages, she advises: “Don’t lose sight of the North.” Theoret manages in this slim volume to communicate how powerfully the inner life may combat seemingly insurmountable circumstances. mRb

Aparna Sanyal is editor of the mRb.