When Silence is Golden

Sun of a Distant Land

A review of Sun of a Distant Land by David Bouchet

Bouchet’s protagonist, twelve-year-old Souleye, has just immigrated to Montreal from Senegal with his family. When they arrive, they’re filled with hope and enthusiasm and want nothing more than to adapt to their new home, to look straight ahead “without turning back.” But Canada is not the Promised Land they imagined. Quiet and sensitive, Souleye watches his parents struggle to find work and an apartment as black immigrants in a predominantly white neighbourhood. He sees his older brother, Bibi, adjust effortlessly, while he fails to be understood by anyone except his lonely neighbour, Charlotte. He sees his family lose their most prized possession, a hard drive filled with memories from Senegal. And as the seasons pass, he sees his father slowly begin to unravel. 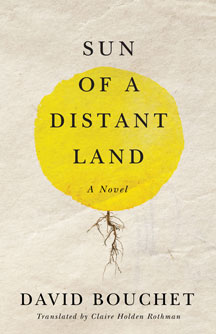 Throughout the novel, Souleye’s empathetic way of seeing the world guides us forward. “In Senegal, we say that when two gazes meet, tongues fall silent and let the eyes speak.” For Souleye, silence is a way of communicating with those he loves most, to understand and be understood by others: “We can spend a long time without saying a word, Charlotte and I, without looking at each other, just being there side by side, not noticing time passing.” When Souleye’s father is hospitalized and stops speaking, their relationship becomes one of listening and silent understanding.

Language and communication are central themes in Bouchet’s novel, and this leads to interesting challenges in translation. In Soleil, the French is interspersed with Senegalese phrases, Quebec words, and English expressions. His novel is rife with wordplay and clever turns of phrases, the most obvious being Charlotte’s misunderstanding of Souleye’s name as “Soleil.” In translation, these moments might easily have been lost. Rothman does an admirable job of capturing Bouchet’s layering of languages through various techniques: by adding context or explanations, leaving words in French, and italicizing English words to highlight their importance, among others. While there are some awkward lines and sentences that don’t quite roll off the tongue, Rothman manages to convey the linguistic complexity of the original work, which is so central to Souleye’s experience as a foreigner and minority.

While racism and discrimination in Quebec are touched upon in the novel, Bouchet’s story is never black and white. As Souleye’s family attempts to put down roots, they experience a complicated mixture of isolation, prejudice, and genuine human warmth. In Petite-Nation, they are exoticized and othered, but also welcomed and admired. Souleye’s life is continuously compared to Charlotte’s, whose troubled home contrasts starkly with Souleye’s warm and loving family. Bouchet’s world is filled with contradictions, and this is one of the major strengths of the novel. The borders between languages, cultures, and identities are easily blurred, and we are left with people in all their marvellous complexities.mRb