A review of Swimming in Darkness by Lucas Harari

Lucas Harari’s debut graphic novel, Swimming in Darkness, has all the markers of a debut by a talented, creative, smart young dude. It’s full of promise as the first movement in a career with potential. If you like work in a noir-influenced genre that takes place in a mysterious location filled with freaky locals and conspiracies, then this is for you.

Pierre is a young man with an academic mindset who returns to his architectural thesis project on baths – specifically the Vals Thermal Baths, designed by a Swiss architect. Pierre has given up on his work before, fled it in some uncertain way, but he returns with a new determination. The opening caption tells us that Pierre was Harari’s father’s student. The closing frame adds that this is the version of the story he has pieced together about this student with whom his father was particularly close.

On his journey there, he acquires a stone that flings itself at him through a train window, a portentous object that plays a later role in the story. He is mocked by villagers, meets another local who drives him out to the baths while telling him the legend of the mountain, and has a slightly embarrassing encounter with a pretty redhead who works at Vals. There is a set-up, then a wonderful, patient, intriguing midpoint, followed by a disappointing payoff. 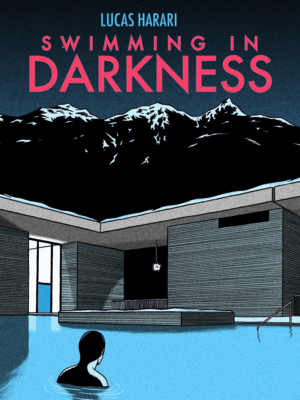 While the story, translated into English by David Homel, may stutter, Harari’s art never does. The strong point of Swimming in Darkness by some distance, his style not only suits the tone, but adds necessary depth, worth slowing for on textless pages. The colouring is striking, with shades of blue and red in a range of intensities, pushing against one another for space on the page. They don’t battle, but there is tension. The pages where the bath dominates are full of a cold blue, with grey and the black of shadows – maybe not as comforting as a bath should be. It’s isolating, it’s a little strange, and it totally suits this bathhouse, where walls and space aren’t quite as stable as they seem. This habit is visually compelling, but more significantly, it creates a world for the book, one that pushes it just beyond realism, allowing colour to share instability with space – and these shifts may hold meaning, or may not.

That question, of whether or not there is meaning, is one that holds back the entire graphic novel. Swimming in Darkness is much like the television show Lost, in which a sense of mystery and the suggestion of connections is much more important than any answers or confidence in meaning. When a sexy, mysterious, and quickly nude woman – who is nothing more than an enigma for the protagonist to briefly pine for before she propels the plot forward – was introduced, I lost hope that there would be any reward at the end of this strange and compelling graphic novel. That she’s a redhead, the only character whose hair fits into the aesthetic scheme is telling: she’s more of an object of mystery, like the stone or the baths, than a character.

Swimming in Darkness has a lot going for it. A student seeks the truth behind this bathhouse built on a mountain, where legend claims a mysterious force resides that moves the earth and swallows a foreigner from time to time. That’s compelling! And there’s a famous, respected, and intense architectural theorist who is after the secret of the baths. The conflict he initiates, and intensifies, with Pierre is exciting, and we want to discover what exactly he knows. The bathhouse itself is gorgeously drawn and unsettling. The student is drawn in deeper than he intended, into something more powerful than he could have imagined, setting out. He may know less than the theorist, but he’s got a connection with the place and its power that the theorist does not.

Unfortunately, it doesn’t live up to all that. That framing device doesn’t add anything but a vague metafictional element, which is the first sign that things aren’t quite what they could be. It doesn’t add to our understanding or play with the meaning of it all. It’s there as a gesture, like that semi-mysterious and soon-naked redhead who is so eager to please and amuse, while also introducing him into trouble with the locals. She’s necessary to throw the plot forward, creating a trigger for Pierre to panic, fulfill what might be his destiny in the baths and in the mountain. Despite this, it’s engaging and original, and Harari is a young creator whose future work should be worth following. mRb

P.T. Smith is a reader and writing living in Vermont. He is the coordinator for the Best Translated Book Award and has written for Full Stop, Three Percent, and Asymptote, among others.