The Funk Queen of the Galaxy

A review of Syllabus by Lynda Barry

The legend of Lynda Barry began, for me, when I heard that Matt Groening, creator of The Simpsons, refers to her as “the Funk Queen of the Galaxy” – and even asked her to marry him.

For those who are not satisfied by such a prestigious title as introduction, Barry is a cartoonist and teacher extraordinaire. She has published many alt comic books (including the Eisner Award-winning What It Is) and has since gone on to teach in the Art Department at the University of Wisconsin-Madison. Syllabus: Notes from an Accidental Professor is the compilation of her notes, sketches, and course outlines from classes she has given over the years. It is not in chronological order, and the writing and drawings of her students are mixed in as well.

This book is not for everyone, though. Upon seeing the cover of the book, a friend remarked that just looking at the hectic colours and handwritten notes would make her too stressed to read it. 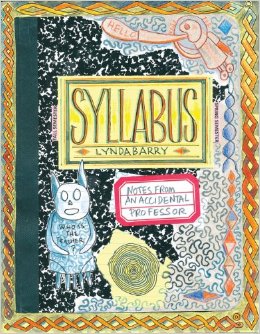 To be sure, the layout of the pages is hectic, but in a cozy way. Each page has been collaged or handwritten and covered in drawings. There is something wonderfully vulnerable about reading Syllabus. Unlike so many other books about creativity, Barry’s books are rough, fun, and very true to her artistic process.

At its core, the chaos of Barry’s notes and sketches contains a plea for readers to pick up a pen and draw something. My friend’s initial reaction – feeling overwhelmed just by looking at the cover – is telling. The act of losing your bearings and feeling lost is an integral part of the artistic process. It takes time to build up a tolerance for this type of chaos, but Barry notes that this is where great artistic exploration begins:

It’s in all the fairy tales. The two clever brothers and the youngest, who is a simpleton. The brothers take shortcuts, but the simpleton wanders, gets lost, encounters other-worldly beings – he treats them fairly, takes them seriously and by his very nature he gains the kingdom in the end.

Barry gives readers concrete exercises to try, and as in the fairy tales, it’s not about efficiency, but rather, finding ways to tap into your own creative energy. Her practice is grounded, systematic, and yet completely open to chance. None of the exercises, however, guarantee a sketch that will be ready to frame on your wall at the end. And, thankfully, this is the point. Instead, her goal as a teacher is to counsel her students in using their guts as their guide. She urges us to wander and gain the kingdom.

The most telling part of reading Syllabus was when I finally put down the book: I had to fight the urge to start drawing immediately. With the review finished, I can now pick up a pen. The Kingdom will be mine!

Nina Pariser is an artist and educator from Montreal. She occasionally performs stand-up art/comedy, which involves drawing weird pictures of animals in front of a live audience.