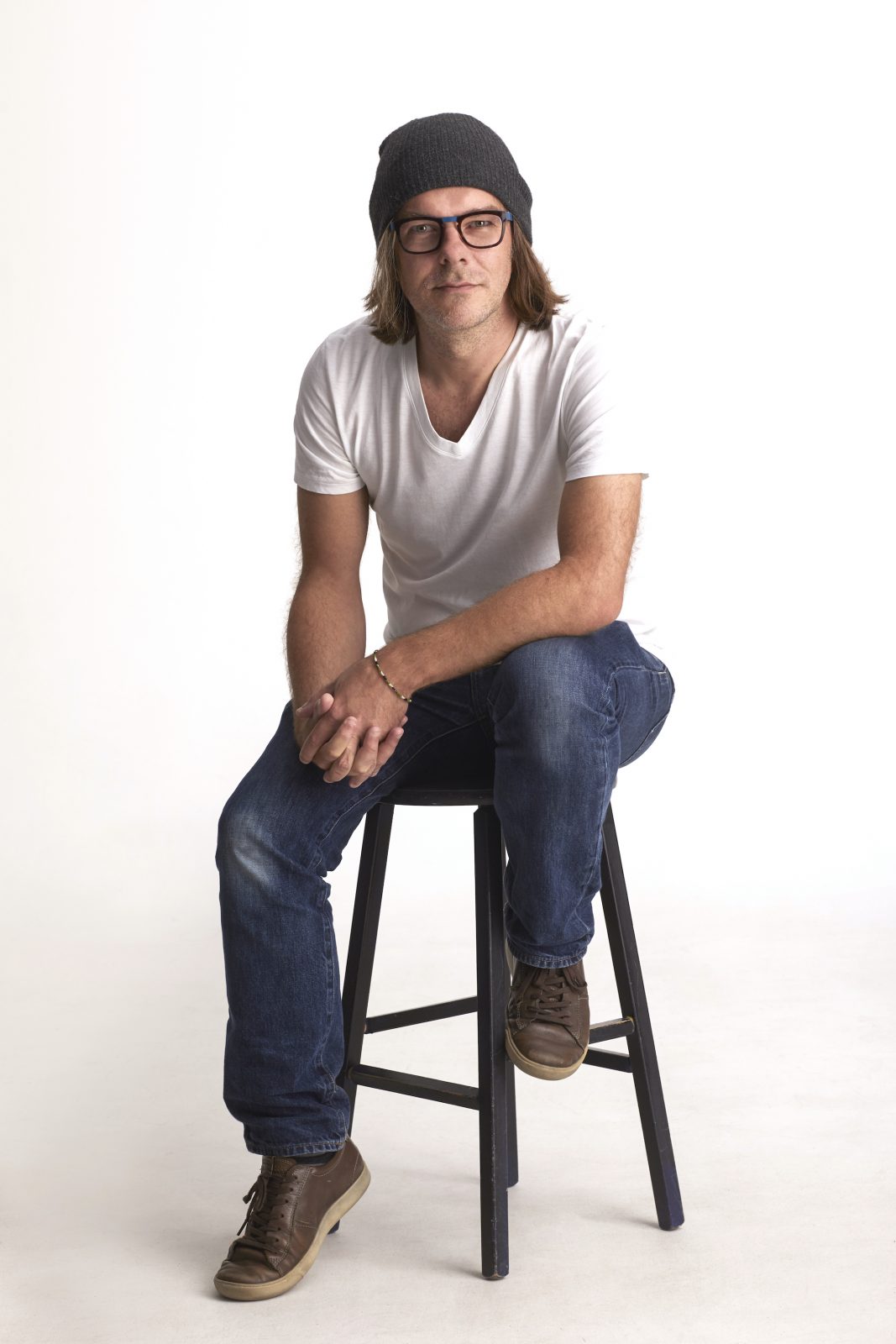 Fly Them to the Moon

Sylvain Neuvel: A History of What Comes Next

AHistory of What Comes Next is a historical sci-fi spy thriller and the first book in Montreal-based author Sylvain Neuvel’s Take Them to the Stars trilogy. Set at the end of World War II, A History of What Comes Next follows Sarah and Mia, a mother-daughter pair of Kibsu, a self-cloning humanoid alien species that has been on Earth for a hundred generations. Sarah (generation ninety-nine) and Mia (one hundred) exist as they have for thousands of years, hiding in plain sight and influencing the acceleration of knowledge that will eventually save humanity.

The Kibsu are driven by the rules their kind must follow: “Always run, never fight. Preserve the knowledge. Survive at all costs. Take them to the stars.” And A History of What Comes Next drops the reader right into the action, where nineteen-year-old Mia has embedded herself into the V-2 rocket program in Germany.

“The early days of the space race were a good place to start,” Neuvel comments from his home in Pointe-Saint-Charles. “It’s a fascinating period because you have basically the best and the worst of humanity co-existing. Science and innovation are just moving forwards at a ridiculous speed compared to where they were before.” 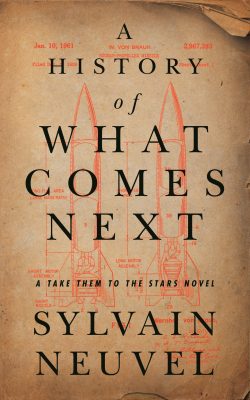 A History of What Comes Next
Sylvain Neuvel

Neuvel is a natural researcher and history buff. His thoroughness is such that when reading A History of What Comes Next, you’d think he’d spent years living in the Eastern Bloc et environs (he’s never been to Russia, yet he’s captured its joylessness perfectly). Take Them to the Stars effortlessly balances creativity with research, truth with fiction. He gained so much extensive knowledge during his research into the major players in the space race and propulsion programs that he became an armchair rocket scientist. Now he interviews astronauts and gives talks at NASA.

As the series moves forward through time, Neuvel remarks, “I get to play with three different time periods. This one is in the ’40s and ’50s, book two is in the ’70s and ’80s, and book three is in the early aughts.” Progress and the passage of time are both elemental themes here, along with the fragility of human life and the importance of legacy. When writing this work, Neuvel says, he was always asking: “What’s the price we’re willing to pay for something?”

When setting out to write this first book of the Take Them to the Stars trilogy, Neuvel knew he wanted characters that could exist any time in history. “If you want the same characters to exist 3,000 years ago and a hundred years from now, you can either make them time travellers or immortal, like a vampire.”

Then he discovered the Amazon Molly: “I was reading an article about a fish in Texas that tricks males of another species to mate with her, then she essentially clones herself. I could have the same character at any time in history, but born at different places and different times. They have totally different experiences and are products of their environment. I could make them unique and the same woman at the same time, which was a really fun device to play with.”

And Neuvel likes his devices. They help him with his craft: “When I wrote [my first trilogy] Themis Files it was 99% dialogue. I wanted to see how far I could take it and what I could do within this very constraining format. So when it came time to write this one, I wanted to set a different kind of boundary. On the one hand, I wanted all the main events in the book to be actual events. I made a list of [historical] events I could play with, and then I put everything in order. Particular things had to happen in a particular order, so there had to be number of years between this and that. I liked that real events dictate the overall plot.”

In the novel’s setting from 1945 through 1961, the real-life technology of the time truly informs how Mia and Sarah operate: fake names, forged paperwork, hush money, and invented backstories. In the ’50s, disappearing is easy: Mia and Sarah just leave town and that’s that. There’s no digital trail or Location Services tracking their coordinates. Neuvel acknowledges: “In the era of the internet and cellphones and pictures everywhere, the Kibsu’s life is going to get a hell of a lot more complicated. Book Two is more about the Kibsu journey so it’s less dictated by history.”

The concept is reminiscent of Quentin Tarantino’s film Inglourious Basterds and Philip K. Dick’s The Man in the High Castle – both works of revisionist historical fiction with World War II’s struggle between good and evil as the backdrop. Neuvel observes that World Word II provides “real-life heroes putting their lives on the line to save freedom. And then you have the probably worst characters ever running the show.”

The Kibsu are not the only aliens on Earth: they are being hunted by the Tracker. Taking the male human form, the Tracker reproduces as humans do, and therefore needs the cooperation of a female human to gestate his clones. “How [the Tracker] sticks around to complete his mission is different, and probably stranger and more confusing,” Neuvel explains. “I imagined him growing increasingly frustrated and violent and losing all respect for humanity in order to keep his identity.” The Tracker is not very effective at his task. He bumbles through this story in a misogynistic rage, unable to understand why it is so difficult to find a willing woman to impregnate. It takes the sexual revolution for the Tracker to be humbled: “When we get to book two, we’re in the ’70s. The world is in a completely different mindset, and so is the Tracker. He gets humanized down the road.”

The world can be a hateful place, especially during a war. Mia reflects: “Deep down, people are built to kill, exterminate.” The Kibsu, Mia especially, possess the instinct of an assassin. She burns red hot and flies into an unstoppable murderous rage when she feels mortally threatened.

With a certain playfulness, Neuvel deftly cuts down to the gristle of every situation: ice pick lobotomies, what it would have felt like at ground zero of Hiroshima, murder by tiki torch, a lifeless body floating down the river. The Kibsu do what needs to be done. (Neuvel assures me that Book Two, Until the Last of Me, is far less brutal.) But A History of What Comes Next isn’t simply a book about raging aliens. At its core is a levity and hope that come from the unwavering relationship between mother and daughter, Sarah and Mia. Their partnership and shared purpose here on Earth is what drives the narrative.

When asked about writing and releasing a book during the pandemic, Neuvel is reluctantly optimistic. “Everything is weird now, and I feel it while I’m writing. There were years when I did twenty conventions. You get to meet the people reading your book and it reminds you of what you’re doing. After a couple years of basically being on my couch alone, you lose track of the fact that [your work] exists out there, and that it touches people in weird ways. I miss everything. I miss literally everything.”mRb