The Art of the Fall

These are the themes that run through The Art of the Fall, a compelling and engaging play that dissects the financial crisis of 2008 through the lens of the contemporary art world.

The play begins with a group of grant assessors, more excited about having lobster rolls for lunch than the projects they are reviewing, as they decide the fate of applicant artists on a whim. They read through grant applications, dismissively discarding them for a variety of personal reasons. (Trigger warning for anyone who has ever spent hours of their life writing a grant application!)

Against all odds, Alice Leblanc, a frustrated and broke visual artist, is granted an apartment in London for several months to pursue her art. Shortly after arriving, she meets up with an old friend (later revealed to be a former lover), an investment banker with the soon-to-be-bankrupt Lehman Brothers. They attend the infamous Damien Hirst auction at Sotheby’s (anybody wanna buy a twelve-million-dollar shark?), where Alice meets Greg, a hedge fund manager and art collector. 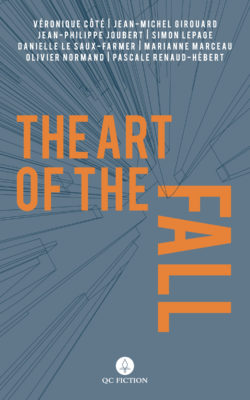 Alice begins to question whether or not she should continue as an artist. After all, she isn’t young enough to be included in the likes of “Younger Than Jesus,” an exhibit of artists all under the age of thirty-three. She is no longer emerging, nor has she made it yet. After seeing the Damien Hirst shark sell, she wonders what the point of it all is – her malaise compounded by the fact that she has not been working since she arrived in London.

Alice and Greg begin a relationship. When Alice discovers that her boyfriend made money off the backs of those who were destroyed by the crash (including her friend, Laurence), she becomes disillusioned and leaves him. But not before she becomes inspired and creates a series of art pieces she titles “Fuck Wall Street,” a personal and professional critique of the relationship between art and finance. Alice is catapulted into fame, a fame we later come to realize has been completely manipulated by the fact that Greg purchased all of her work.

If the question being asked in this play is what is art worth, then the answer seems to be: nothing. Art is not worth anything until someone is willing to pay for it.

The play, created in a collaborative workshop by its several actor-playwrights, is described as documentary fiction in an afterword by Jean-Philippe Joubert, the director of the original performance. It is easy to read and cleverly structured, a mixture of fact and fiction that places imagined characters in real settings and at actual events.

In several scenes, minor characters not even graced with a first name (Barista at Starbucks, Karaoke Guy, Shoe Polisher) break the fourth wall and directly address the audience. They give us a detailed and comprehensive analysis of how the stock market works and what factors combined to result in the financial crash of 2008. These minor characters also inform the audience on the rules of the contemporary art world. In contrast, the play’s main characters – Alice, Laurence, and Greg – never address the audience directly. This juxtaposition of styles works well and allows us to maintain our suspension of disbelief without placing the burden of exposition on the shoulders of the main characters.

The Art of the Fall left me disturbed, enlightened, and seriously questioning the value of art in a world where a shark in formaldehyde can be worth twelve million dollars. mRb

Alexandria Haber is a playwright, dramaturg, and actor. Her plays have been produced in Montreal, Winnipeg, Calgary, Edmonton, and the UK.