A review of The Bidding by Bill Haugland 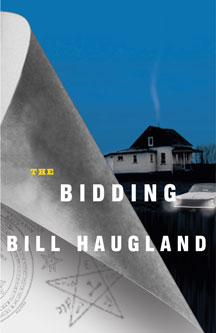 Montreal news reporter Ty Davis, whom we first met in Bill Haugland’s Mobile 9, is back to report on and resolve another mystery. This time, however, Davis has an international secret society to deal with.

A young girl is kidnapped in Montreal. Her body, along with those of her kidnappers, is found at a farmhouse in the Laurentians. Davis, who goes to the farmhouse when he hears that a police operation is underway, is present when they make the gruesome discovery. Accompanied by his usual comrade, cameraman Greg Peterson, and a junior reporter Jérôme Poirier, Davis is sucked in by the appearance of cannibalism, by the occult symbols on the floor, and by the fact that Poirier’s father has a cloak similar to the ones found near the bodies of the kidnappers. Taking investigative journalism to the limit, Davis is willing to put his life in jeopardy to get the story.

Haugland’s new mystery novel, The Bidding, is without a doubt a page-turner. As action-packed as Mobile 9, The Bidding keeps readers wanting more despite the cringe-inducing moments. Cringe-inducing because of the writing, that is. Of note are the never-ending clichés that Haugland tries to mitigate by adding “proverbial” before them: “Assignment editor Jason Moore was under the proverbial gun,” “On some days, chasing stories was like finding a needle in the proverbial haystack.”

Likewise, the inordinate amount of ellipses used in the book – a habit one would expect from a young writer used to texting – makes one wonder if Haugland knows about colons, semicolons, and em dashes. For example, “Each brick structure, along the avenue, house four units … two upstairs and two on the ground floor.” Or more strikingly: “‘And it’s a complicated and’ … Bradley searched for a word … ‘horrifying story, Ty.'” Some of these ellipses even make readers hear the equally clichéd three chords of suspense in their head: “Ty felt a twinge of concern. ‘You mean … something physical?'”

Closer editing (not to mention another round of proofreading) would have greatly improved this otherwise riveting novel. mRb