The Birds That Stay

A review of The Birds That Stay by Ann Lambert

The highly readable noir crime novel The Birds That Stay – a first book from established playwright Ann Lambert – starts with one person strangling another in the frigid Quebec Laurentians. It ends with something far more disturbing: a description of a shocking and true chapter in Canadian history that a brave few (now including Lambert) struggle to make known even as others attempt to smother it.

The novel opens with an introduction to three seemingly unrelated characters, then gradually braids their stories together. Marie is a divorced, middle-aged science teacher coping single-handedly with the heart-wrenching practicalities of her mother’s progressive dementia. Ennis is a handsome and wealthy financial planner with a hot wife and young kids who is receiving threatening anonymous messages. And Roméo Leduc, chief homicide detective, is stoically fighting cravings for a cigarette while trying to figure out why anyone would want to strangle a quiet elderly woman living alone in the countryside. 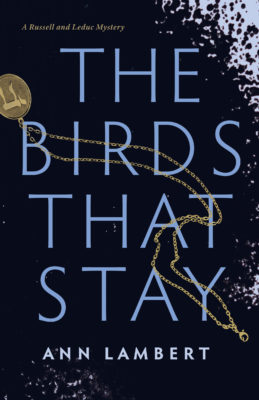 The Birds That Stay
Ann Lambert

The central story is the murder investigation, but dark deeds abound in this book, from intimidation by thugs to hate-driven arson to white-collar embezzlement. As the book goes on, one of the central characters is shocked to learn that the most unconscionable act of all was not unlawful: for decades following the Second World War (and this is true – not part of Lambert’s fiction) an untold number of Nazi war criminals were permitted to enter Canada. Some gained access during the Cold War through a state-sanctioned “Ratline to Canada,” exchanging low-level intelligence on left-wing fellow immigrants for safe passage to the true north, strong and free. No government action was taken against these Nazis until 1985, when the Deschênes Commission was established to investigate. By that point, some had been enjoying a life of Canadian freedoms for decades.

The Birds That Stay is populated with complex characters, not one of whom has been untouched by some form of trauma, be it divorce, addiction, abuse, abandonment, or betrayal. The skillful way in which these characters are rendered is part of what makes the book so engaging. Marie, bravest of them all, describes her tribulations with a resigned acceptance: these are the facts of her life, sad and unfair but true. She is the one who stayed close to the nest when virtually everyone else – her siblings, her father, and her husband among them – flew away, never to return.

The Birds That Stay also shines in its fantastically accurate descriptions of rural Laurentian towns. We see the region not through the eyes of tourists taking in the scenic forested hills and clear lakes, but through the eyes of its residents, who grimly note, with the exodus of young people, the failure of long-standing local businesses and the resurgence of Hells Angels activity. There are also dense nuggets of information about various aspects of Quebec’s political and cultural history, which leave the reader feeling rather erudite, and a sly weaving of contemporary events (including Jian Gomeshi’s trial and the infamous Rob Ford crack video) into the fabric of the narrative.

Ultimately, The Birds That Stay is a book about accepting the truth of one’s family history, recognizing that it is an inescapable and immovable part of who we are. It is also about drawing courage from that bedrock of self-knowledge. In this age of rising populism, that is a theme that will resonate with many readers. As one character notes, thinking back on another era of rising populism: “They say when there’s a pack of wolves, you howl with the wolves. I wonder if I would’ve been brave enough to leave the pack. Or at least not to howl with the rest of them.” mRb