The Black Doctors of Colonial Lima

By focusing on these three practitioners, Martín shows us the peculiarities and ambiguities that characterized the nineteenth-century world of medicine. Larrinaga, Dávalos, and Valdés were exceptional figures whose racial identifications varied: negro, mulato, pardo, zambo. Their stories are relatively well documented by the procedures and publications that brought them notoriety during their lives, yet Martín reminds us that the archives rarely dignify the contributions of Latin America’s lower castas (racially organized social classes). Still, the book synthesizes a range of archival documents and secondary sources to explain how three mulatos negotiated the gendered, racial, and professional expectations of their time. 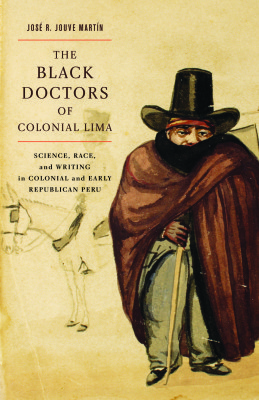 As Peru inched toward its eventual independence from the Spanish Empire in 1821, Lima’s black physicians increasingly entered the public arena. Many of these doctors and surgeons voiced their political passions while strategically placating colonial powers. Their work, in all of its forms, aimed to glorify the lower castas as generous contributors to a soon-to-be independent nation.

Martín’s close study of the prestigious medical journal Mercurio peruano shows how the act of writing helped mulato practitioners champion the crusade of respectable citizenship. This Lima-based publication greatly impacted the city’s larger social order. A point of constant debate for contributors was what constituted a “true” sexual transformation, that is, one that would be sanctioned by the church. Martín presents several cases at length where physicians and enthusiasts described such “exceptional deviation[s] from the order of nature.”

Elites of the medical sector were predominantly white, male, and wholly invested in a colonial standard of reform. Consequently, only two authors of African descent featured work in Mercurio peruano: Larrinaga and Valdés. When those “not whiter than cinnamon” were accepted to this inner circle, they were not treated as equals. So it is no great surprise that, while writing for the journal, these mulato physicians sometimes used pseudonyms to promote their practices and theories. A presumed-to- be-white identity temporarily kept their ideas flowing and the naysayers at bay.

Martín also offers examples in which individuals, residing both in Lima and far across the Atlantic, directed antagonistic messages to Larrinaga, Dávalos, and Valdés. He points to the Mercurio peruano and other public forums of the time, showing how they now serve to document the debates concerning the integrity of Lima’s black doctors.

The ghosts and shadows of a few more characters appear in Martín’s historical account, as well. Female and male “folk-healers” paved the way for black physicians in Lima. Their healing methods leaned on indigenous, African, and European traditions to restore morale across all castas. However, the shift from “healer” to “doctor” was not a smooth one. Prejudice against the darker and mostly illiterate classes remained. For this reason, when the names of these folk-healers are found in the archive, it’s usually in the context of an alleged criminal record.

Martín explores the real and artificial chasms between these camps of healers, while turning a critical eye to Larrinaga, Dávalos, and Valdés. Yes, these black physicians spoke in and against spaces of privilege. But, in defending their own abilities, they sometimes degraded groups whom the colonial regime deemed abject. A look into The Black Doctors of Colonial Lima begins to untangle these exceptional, complex, and understudied narratives of nineteenth-century medicine. mRb

Yasmine Espert is an Art History PhD student at Columbia University specializing in the arts of the Caribbean and its diaspora.