The political turmoil of the Middle East has been the backdrop for much of Dimitri Nasrallah’s work. He returns to it with a new perspective in his latest novel, The Bleeds.

His two previous books explored the legacy of the Lebanese civil war, a conflict that Nasrallah witnessed firsthand. Both his debut, Blackbodying, and second novel, Niko, focus on the intimate experiences of average people navigating corrupt governments and military violence. In The Bleeds, however, Nasrallah goes straight to the top, training his focus on the leaders who create those conditions. The novel examines a family dynasty of iron-fisted dictators with the chillingly apropos surname of Bleed, tyrants motivated solely by self-interest and profoundly unconcerned about the citizens they rule. Set in a fictional Middle Eastern dictatorship on the eve of its own Arab Spring, the novel represents an important transformation in Nasrallah’s fiction.

“After writing about a child whose life is altered by war, the greatest contrast of that experience would be focusing on the type of person who controls the war,” Nasrallah tells me, explaining the transition in his writing from Niko to this latest work. Winner of the Hugh MacLennan Prize for Fiction and longlisted for the prestigious International IMPAC Dublin Literary Award, Niko charts the epic journey of a child displaced by conflict, drawing from Nasrallah’s own childhood experience fleeing Lebanon. His family spent time in Kuwait, Dubai, and Greece, before finally making their home in Canada. Nasrallah acknowledges
that it was “a difficult book to write” and that “a lot of pain went into Niko’s crafting.” For The Bleeds, he wanted to do something different. “I wanted to get outside of myself and change the process this time around.”

Strongman leaders have long held a place in Nasrallah’s imagination. “To some degree I’ve always had this kind of persona [in mind], shaping the events that resulted in me moving so many times as a child,” he says. One of the guiding questions of his writing process was “how did they come to be so far removed from the people they affect?” 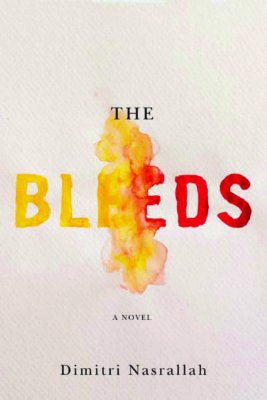 One needs to look no further than the opening scenes of the novel to find answers to this question. Nasrallah’s dictator perfectly fits the image of the post-colonial strongman. Mustafa Bleed has led the country his father founded with an iron fist through eight mandates, suppressing the nation’s ethnic minority and lining his pockets with money from public coffers. He is petty, vain, and completely out of touch with the people he rules. He begins his day in his private helicopter, admiring the landmarks of the capital city. Among them is an enormous statue of his father in Revolution Square, as well as “the Bleed cinemas, the Bleed National Library, Bleed Stadium.” The country, it would seem, was built in his own image.

But he is ailing. Following a major stroke, the octogenarian has handed over the presidency to his only son, Vadim, a coked-up playboy with zero political instincts. Young and inexperienced, Vadim is a pure narcissist. He has little interest in his native country or the monuments that bear his family name. We first encounter him riding home in his limousine after voting for himself in yet another rigged election. Instead of looking forward to his next mandate, Vadim retreats into his memories, reliving his glory days as a race car driver on the Formula One circuit. Confident that his father is arranging his victory, the thought of losing the election never crosses his mind.

The Bleeds isn’t a mere burlesque of a dictatorship, but is instead a fierce political satire with real teeth. It has bite because, as clueless as they might be, Mustafa and Vadim are fully realized characters, and the ramifications of their callous actions always have consequences for them and for their country. “We tend to simmer satire down to its basic ability to mimic and make fun,” Nasrallah observes. But instead, he believes, it is “the most political of all the genres – the only form that grants an individual the necessary cynicism to comment upon the political world.”

Essential to the success of this satire is Nasrallah’s remarkable literary world-building. The fictional country of Mahbad is a former British colony turned client state of the Americans, who mine the nation’s plentiful uranium deposits. Unequally divided between warring ethnic groups, the nation feels unnervingly real. Nasrallah, a keen observer of global politics, cites events in the recent history of Iran, Zimbabwe, and Lebanon as informing his invented country, but for The Bleeds he didn’t want to be beholden to real people and histories. Moreover, for Nasrallah, “to set the story in one of these places would seem like a low form of ideological tourism.”

The Bleeds isn’t a mere burlesque of a dictatorship, but is instead a fierce political satire with real teeth.

From the reader’s perspective, it is clear that a lightly fictionalized version of one country’s travails would not have served this novel. Nasrallah’s goal isn’t simply to mock one dictator, but rather to satirize the idea of the strongman, as well as the international powers that allowed them to flourish in the post-colonial era, whole cloth. A satirical country worthy of Swift, Mahbad gives us a clear-eyed view of how dictatorships are Potemkin states, built to impress the eye of the dictator only, and ultimately hollow. Mahbad is a portrait of political power gone awry.

The counterweight to the self-obsessed myopia of Mustafa and Vadim are the fictional news articles interspersed throughout the novel’s first-person narratives. Articles from the state-funded daily newspaper gone rogue and an independent blog give us a glimpse of street-level life in the capital. The decision to include these fictional articles and to set them apart on the page, mimicking newspaper design features such as mastheads and columns, emerged early in Nasrallah’s creative process. They allowed him to create what he calls “a different kind of novel, one actively engaged with the larger cultural phenomenon of using language to actively shape … the world.” When Mustafa delays announcing the election results, these news sources capture the people’s outrage at his flagrant abuse of power. After Vadim leaves the country on a wild goose chase, the media reports on the activist movement taking to the streets of the capital and being brutally suppressed by the regime.

While there are almost no women in the Bleed camp, all of the novel’s crusading journalists and opposition politicians are women. “Authoritarian regimes are perhaps the most far-reaching embodiments of structural patriarchy that we have,” Nasrallah observes. Even when facing threats to their personal safety for speaking truth to power, the fierce women in this novel persevere in denouncing the Bleed regime. “Women do so much of the thankless pushing against the status quo in society,” Nasrallah says, and so he knew that “the elements of progress in the novel needed to be female, as a push toward a wider future for all.”

The Bleed regime is destabilized over the course of the novel, but the prospects for real change in Mahbad are uncertain at the book’s end. Nasrallah believes that reports of the death of the Middle East dictator are greatly exaggerated. “Calls for change result in chaos, create a power vacuum, which is then readily filled in by more military intervention. … The reality is, in the end, nothing substantial changed beyond the deepening of disillusionment.” As the novel closes, only one thing is certain: that laughing in the face of dictators offers a brief consolation from the horror of their crimes. mRb