The key to understanding the French, according to Julie Barlow and Jean-Benoît Nadeau, authors of The Bonjour Effect: The Secret Codes of French Conversation Revealed, is to consider the gulf between communication and conversation. According to the Canadian duo, the French do not communicate; they converse. And when they do so, they may deliberately provoke controversy, they may avoid admitting they don’t know something, and they may even say no when they mean yes.

Partners in print as well as in life, Barlow and Nadeau initially set out to write a step-by-step manual on how to speak to the French. But after a year of living in Paris with their twin daughters, they decided to go deeper. The result is an astute and comprehensive interpretation of how the mores, education, and national character of the French are revealed not only by what they say, but, conversely, by what they don’t – or won’t – say.

“The French are raised to use certain buzzwords and gestures to initiate interactions, whether social or professional,” write the authors. The starting point to decoding the French language as it is spoken in France is the word bonjour, which is not so much a greeting as an acknowledgement. Forget to say bonjour and you will be exposed as being mal élevé (badly raised), as Barlow discovered one day when she was chastised by a bus driver for her omission. Bonjour, je vous en prie, and au revoir, among other phatic expressions, are to the French as automatic as I’m sorry is to Canadians. 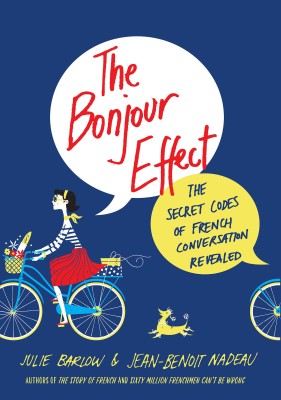 To better equip the undaunted reader, the authors have divided the book into two sections: Form (“how the French are formatted to speak” through upbringing and education) and Content (“what they like and don’t like to talk about”). Two topics important to avoid are family and money. That makes the nuances of life in France a slippery slope when approached from a North American’s perspective, for whom commonplace conversation often begins by asking a person’s name or what kind of work they do. These are questions considered to be very ill-mannered by the French.

And yet, despite all the pitfalls and hurdles, the French hold conversation in the highest regard and long ago elevated it to an art form in the salons that flourished in the eighteenth and nineteenth centuries. In fact, Barlow believes she had a major breakthrough when she realized “it was best to think about French as a recreational sport.” Considered from that point of view, being proficient at speaking French is not nearly enough to converse in French, but understanding which topics are viable and how to address them helps.

If you have ever been confounded yet intrigued by the French (as I was while living in Provence for six months), you will find yourself devouring this book and shouting ah! every now and then. The secret codes of the language and culture are revealed as the authors wisely repeat an approach that is “more anthropological than journalistic,” a methodology they employed in their international bestseller, Sixty Million Frenchmen Can’t Be Wrong. With insight, respect, and good humour, Julie Barlow and Jean-Benoît Nadeau have written a highly readable guide to the Gallic mindset.