A review of The Chaplain by Paul Almond

Paul Almond is a lifelong storyteller. He began his career in the 1950s directing and producing television for the CBC, BBC, ABC, and Grenada TV in the UK. He is co-creator of the award-winning documentary Seven Up!, has received countless awards, and was appointed to the Order of Canada.

Now, Almond is well on his way to fulfilling a grand vision in The Alford Saga. The Chaplain is the fifth novel in the series, with three additional novels planned. The saga covers Quebec, Canadian, and world history from 1800 to 2000. It is, quite plausibly, Almond’s creative and personal magnum opus. The series explores the arrival of Almond’s own family of British settlers in North America and illustrates the author’s connection to the land in his native Shigawake, in the Gaspé region of Quebec. The Chaplain is based upon the experiences of Almond’s uncle and hero, Reverend John M. Almond. 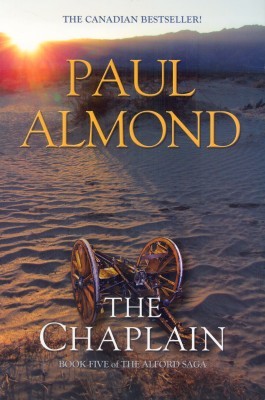 The Chaplain
Book Five of the Alford Saga
Paul Almond

The novel is set during the South African War, or Boer War. Almond explains that Great Britain had “decided to wage one of its little wars against the Transvaal and Orange Free State: two white, Protestant, Dutch-speaking Republics in southern Africa, who had declared their independence from all European empires.” The war is known as the first to employ the use of concentration camps, amongst other horrific procedures. Almond points out that the Royal Canadian Regiment joined this war before these means were used.

As The Chaplain book trailer promises, our protagonist dives into an adventure with no rest to spare. We are introduced to Chaplain John “Jack” Alford in Quebec City, where Canadian soldiers from across the country have landed and are readying to depart for South Africa. When the Chaplain discovers that Church of England clergy are not represented on the ship, he volunteers immediately, with permission from the Prime Minister, no less.

This story, set during the time of Canada’s first international war initiative, is built upon the deep structure of British imperialism. However, this historical-action-adventure novel is written with sensitivity. With well-constructed, straightforward prose, the story slowly peels away the layers of social relations having to do with nationalism, classism, poverty, and the harsh reality of war. The empathetic and straight-shooting Chaplain is attuned to the needs of his parish and the differences amongst its members. In between bouts of soldier seasickness, enteric fever, bullet wounds, and death, the Chaplain is earnest in honouring his faith and people.

The novel begins with Canadians referring to the Boers as savages whom they are primed to destroy. But as the story continues, dissenting viewpoints about the war emerge: we see soldiers who enlist to avoid certain poverty and witness slight English discrimination against the French. Despite the difficulties our protagonist encounters, Almond tirelessly illustrates a gentlemanly and characteristically Canadian visage for the Chaplain. By the end of novel, the Chaplain, having witnessed, suffered, and questioned the horror and destruction of war, is tending not only to broken and battered Canadian soldiers, but to Boer soldiers as well. There is romance, heartbreak, and love.

The next novels planned in the series will cover World War I, Montreal during the Great Depression, and the development of Canada’s cultural industries (including the National Ballet of Canada, the Golden Age of Canadian Television Drama, and the beginnings of the motion picture industry). It is evident that Almond has undertaken this project with gusto, and the upcoming topics in the series reveal the breadth of this vision. mRb