The Dirt on Clean

A review of The Clean Body by Peter Ward

I was recently reading about the “no poo” (no shampoo) trend according to which, for environmental and health reasons, people wash their hair every week or so with baking soda and apple cider vinegar or other natural, homemade mixtures. In one of the sources I read, the author claimed that, before the twentieth century, people washed their hair with natural soap every month. Wanting more information on the matter, I was excited to dive into Peter Ward’s The Clean Body: A Modern History. While he doesn’t explicitly say that people washed their hair once a month (he can only really base himself on what “loveliness literature” suggested people, especially women, should do), he certainly doesn’t make infrequent hair washing sound wholesome. What I did learn, however, was that (at least) two hundred years of social history, class struggle, marketing, and urban planning lie behind the simple act of taking a shower.

What distinguishes Ward’s book from other volumes on the subject is the fact that he focuses on modern Western history only, that is from the mid-seventeenth century to the present day – so no mention of Roman aqueducts and saunas or medieval hygiene – and that he studies five Western countries: France, Germany, Great Britain, Italy, and the United States (occasionally mentioning Canada along with its southern neighbour). What’s more, instead of giving us a purely linear history of hygiene, Ward separates the content of The Clean Body into three categories – cleanliness as tradition, cleanliness as habit, and cleanliness as commodity – which, at times, creates a feeling of confusing timelines and repetition. 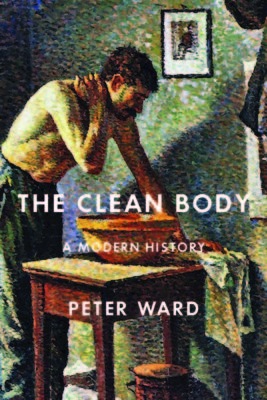 Casual readers may find their interest wax and wane over the course of the book. The description of some living conditions before running water is cringe-worthy, especially for the poor who could barely afford to buy water (“On the eve of the French Revolution a cubic metre cost the equivalent of three to four days of wage labour”), let alone go to expensive public baths. It is interesting to note that the bathroom, which we now take for granted, only started being part of British and American house designs between the two world wars and that in some countries, like East Germany, “two thirds of homes […] lacked a bathroom or toilet in 1971, and almost one third had no running water.” Likewise, Ward’s depiction of la grande lessive, a village custom in France where twice a year every woman in the village spent two or three days literally washing their dirty linen in public, was fascinating (though I’ll keep my automated washing machine and its thirty-minute cycle, thank you very much). The book also contains twelve photos of paintings and postcards that help illustrate his descriptions.

Unfortunately, Ward’s detailed history of certain soap companies and a few statistic-heavy sections could cause some readers to lose interest. As he, himself, puts it: “anecdotes offer us glimpses of the small human dramas behind the numbers,” and he could have followed his own advice more often. To be fair, other academics interested in the history of population health will undoubtedly benefit from his wide scope and extensive notes.

Throughout modern history, the concept of hygiene has shifted, going from mere outward appearance (distinguishing the rich who had time and money to get their clothes washed from the poor who didn’t) to the idea of cleanliness for health (with the discovery of germs) before becoming an easily purchased sign of beauty and a daily routine. But, as Ward concludes, with the realization that we may now be oversanitized and
a better awareness of what goes into our beauty products, the definition of cleanliness is once again shifting. mRb