The muse in our time has taken a conceptual turn. Etymologically, a poet is a “maker,” and many writers are constructing poems from other texts or finding formulas to generate them. Mary Dalton’s extraordinary book uses the traditional rug-making craft of her native Newfoundland as a basic metaphor. Hooked rugs were assembled from strips of cloth, an activity of finding and then constructing a rich mosaic, a cottage industry bricolage. 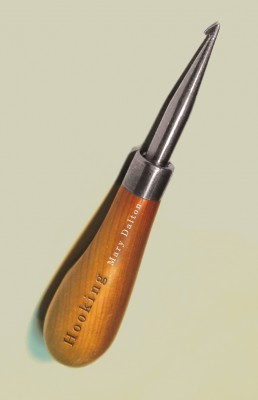 She works in the ancient tradition of the cento (the Latin term referred to a patchwork cloak), a composition made up of passages from other authors. Dalton’s scrap bags are notebooks containing thousands of lines from other poets, an extraordinary range of them. (William Burroughs kept vast files of texts from which he created his celebrated cut-outs.) Her procedure is to make a poem from, say, the third line of many poems, or the fifth. Twenty pages of her ninety-five- page book are devoted to a list of the sources.

Dalton began her project by thinking about mash-ups in contemporary music. Like any good mash-up, her poems are seamless creations. The works cohere in subtle ways, with their titles usually pointing toward the theme or atmosphere being created. Most of the poems are in stanzas, which leads the mind to expect lyrical tidiness, an expectation usually defeated by the free progression of the poem. We get a series of ghazal-like surprises and our understanding of coherence is expanded. Dalton has cited Christian Bök’s Eunoia, a work of compulsive compilation, as an inspiration. But nothing in Eunoia sounds like this, the conclusion of “Press”: “The jukebox music takes you back; / braver than lipstick, / its threads the colour of cantaloupe and cherry.” The sources are the seventh lines of Gerald Mangan’s “Glasgow 1956,” Alison Fell’s “Pushing Forty,” and Michael Longley’s “An Amish Rug.” The three lines convey nostalgia through complex synesthetic imagery: the music is compared to threads, a visual image, and the threads are compared to lipstick, which is visual and tactile and given colours that are also flavours. Perhaps odour is implied too. We are in the world of juvenile or tawdry romance evoked by the obsolescent jukebox image, one quite removed from the Amish rug in Longley’s original. The use of a poem about rugs in the final line is a clever reminder that we are in the midst of a book founded on a rug metaphor.

Dalton has said in an interview that a cento is a kind of anthology. A reader could spend years going through her poems and their sources. The poems she uses are almost entirely modern, but a poet using her methods could choose poems from an earlier period and the result would be a different range of diction. P.K. Page added the glosa to our repertory of forms. The delights of Hooking may be a new precedent.

The cover of Jon Paul Fiorentino’s Needs Improvement is a hilarious visual poem. It simulates a traditional report card “To The Parents Of: Jon Paul Fiorentino,” which contains some damning marks: 70 in English, 54 in Imagery, 49 in Responsibility, to select a few. A whole section of this diverse collection is called “Needs Improvement: Pedagogical Interventions.” It contains “The Report Cards of Leslie Mackie,” a student whose progressive destruction by his teachers, parents, and peers is traced in the cards, with their progressively more savage tone. The purpose of the section, the author says in his notes, is to “critique the culture of homophobia, transphobia and bullying in early childhood education.” 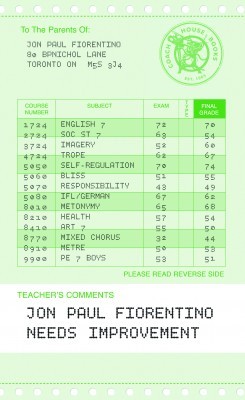 The section includes comic presentations of postmodern theory through labeled diagrams of machines, which is about as conceptual as poetry can get. The ideological state apparatus theory of Louis Althusser takes the form of a dishwasher, for example, and the Freudian process of condensation and displacement is represented by a nozzle with controls. There is no diagram for Derrida’s “free play of the signifier,” but the whole book represents that principle. The satire on blurbs is especially amusing: the genre is often glib or dishonest, although Nicole Brossard’s praise on the back cover of Needs Improvement is accurate.

The conceptual muse is at work in this book: Fiorentino turns a text by the fearsome critic Judith Butler into a set of poems about “The Winnipeg Cold Storage Company” by manipulating words from her Excitable Speech; other poems rework texts by Oscar Wilde, Roland Barthes, Robert Kroetsch, and William Hazlitt. Confessional poetry is sent up by “Skulk Hour,” a parody of “Skunk Hour,” the poem by Robert Lowell that initiated the movement.

In the final part of the book, Fiorentino presents eight villanelles, as traditional a form as it gets. Three of them use the mottoes of Canadian cities as their refrains, a bit of sampling by our DJ. The mottoes are mocked in two of the poems, but in the final villanelle, “Salter Street Strike,” they are taken seriously. Both are associated with his home city, Winnipeg: “People before profit” and “One with the strength of many.” He associates these modestly utopian slogans with one of his mentors, bpNichol, whose open-heartedness is celebrated in the poem. The book ends, as many books do, with modest hope.

Deena Kara Shaffer’s book is concise and focused on one theme: grief, mainly for her parents, who died of cancer in quick succession. The grey tote of the title is a bag used to pack necessities for a stay in the hospital. Such a bag (maybe the same one), she tells us, was used by the speaker’s father, mother, and grandfather. And the theme of mortality is extended one more generation by “The Grey Tote: / Me,” in which she describes the grey tote sitting in a closet, concealed by “anything that can be put in front,” ready for use for trips and projects, or, by implication, for a trip to the hospital. It’s as much a memento mori as the traditional skull on a desk. 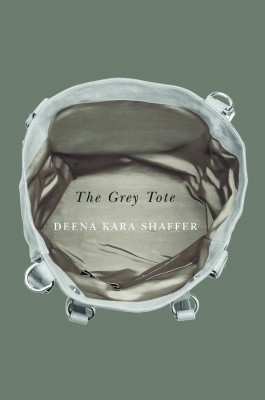 In the opening section, she approaches her losses gradually: the first few poems deal with perils in the woods and at the edge of a waterfall. Then the subject of cancer arises, with poems about cancer patients contemplating or committing suicide. “Into That Morphine” (rather than “Into That Good Night”) describes an assisted death. She ends the section with poems about her parents, Mum, Dad, Grandad.

The second section contains the graphic poems about the illnesses of her parents. She avoids sentimentality rather scrupulously, even satirizing her mother’s optimism: “her cancer wasn’t catchable, / but boy, her belief in wellness was.” The administration of dying is outlined in “Ward Calls”: the process begins with apologies for the diagnosis, presumably by a doctor, progresses to the visit by the oncologist “armed / with a social worker,” and ends with Haldol – and as a last minute touch, “a priest to sing you there.”

In the concluding section, she deals with the aftermath of death: the process of grieving, the anxiety about one’s own mortality. Shaffer’s poems are concise, which helps maintain the tone of tough, clear-eyed attention to the realities of dying, but the music is harsh, relying on parallelism and alliteration more than imagery and rhythm. Often the lines are brief to the point of claustrophobia. More generosity of style would intensify the feeling without necessarily leading to soppiness. However, looking steadily at life and death is a form of generosity. The effect of this book is cathartic. 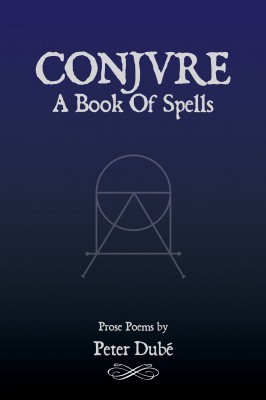 Peter Dubé’s poems are a curiosity. Poets are drawn to the occult – there was Yeats and his lunar cycles and Ted Hughes with his Ouija board – and Dubé reads grimoires: books of spells, instructions for creating magical effects. In Conjure, the incantatory form lends itself to prose poetry. The rhetorical pattern is instruction, a command given either in the opening line or shortly after: “Close the doors,” “Set the table just for two.” Forty-four poems in the imperative mood become monotonous. The instructions are mostly for rather bland effects: to cause a desired person to seek you out or to know a distant happening. Even the spell to make your voice heard in other worlds has no dramatic event. This is very well-mannered magic. Dubé practices “surrealist automatism,” and we would expect a genuine road to the unconscious in the manner of André Breton or Philippe Soupault. But these poems are meticulous and neatly worked out. This is not black or white magic but grey. mRb
Bert Almon lives in Edmonton, Alberta. Retired from teaching, he follows the careers of his former students.