The Country Will Bring Us No Peace

Living through dread is usually an extremely uncomfortable experience, whether in life or art. Sometimes in art, discomfort is the point, horror movies being an easy example. In The Country Will Bring Us No Peace, translated by Pablo Strauss, Matthieu Simard tacks the ship of dread in a different direction. For the most part, it is a pleasurable book, the dread passing by like a quiet late summer day in the countryside, with neat sentences paced nicely with more indulgently pretty or philosophical ones.

Simon and Marie, the novel’s two narrators, are a couple grieving the death of their child, who is an unnamed, painfully felt absence for most of the book. They have left the city and moved to an old home in a tiny village, where they try to heal both themselves and their relationship and produce a new child: “We came here in search of a particular peace that we felt we deserved: wide-open spaces and tall grass and silence and no one around.” The dread comes in multiple forms in this small, dying village wary of outsiders: Fisher, the man with aggressive undertones and an eye for Marie; Simon’s own current of violence; and the silence that extends over their lives and the distance between them. By page 16, we’re told how it all ends, when Simon, on one of his shifts as narrator, confesses, “At this point we don’t know that we’re going to be the ‘murder-suicide’ couple.” 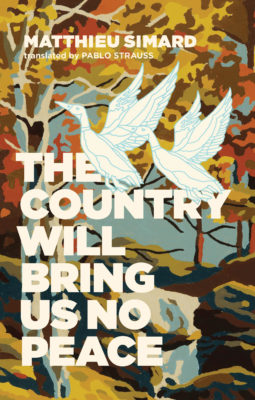 Despite the dread and the coming violence, Simard keeps a gentle tone, which lets you forget it or choose not to believe it. The section just after this begins with a visit to the shop, which is out of eggs and chicken because this town has no connection with the outside world. There is no mention of the confession – it may as well not matter. Despite the cold certainty of their ending, Marie and Simon want to believe otherwise and occasionally find that faith: “We’re here to make her belly swell until new life bursts forth. That’s the one reason we’re here, and we’re going to survive.” They’re going to overcome their grief. They only need each other and a return to intimacy to close the vast distance between them, to avoid death. After all, they’re telling this story, aren’t they?

Lies. This is a book of lies. There are so many lies that the ever-present dread mixes with uncertainty. Was that confession of murder-suicide a deception? Everyone in this novel has secrets and lies, like the young woman, Alice, who acts deaf and mute to render herself and her past invisible. Marie, pages after claiming she doesn’t “want to get a reputation as a liar,” instead believes that “we can focus on our little lives in the bottom of our crate. I’ll lie.” Simon sees “a blue shadow seeps into Marie’s eyes when she lies,” but he lets it pass because he believes that “one more lie can’t hurt me.” When, midway through the book, they take time to remember their first meetings and the short time they had with their daughter, there are still lies – stories they told each other for fun, fibs their daughter told.

The lies, the mistruths, the moments of violence – some of them shocking, traumatizing, and seemingly unforgivable – the sense that secrets are underneath everything, the mysterious antenna in town, and a walk in the woods that brings supernatural elements, the fact that we don’t know whereor when Marie and Simon are narrating from – all of these are wonderful ingredients. For them to work together, a few other things are needed, and both Strauss and Simard bring them: the tone of the translation, which brings out the bits of comedy, both light and dark, from the two narrators; and their love for each other, which, despite being only embers, is still felt, along with their fears, their hopes, their determination, and their despair. These characters are not pawns in a narrative game.

However, since we already know how it all has to end, even though there are plenty of mysteries, too, that ending has to match what we’ve been promised and yet still surprise us. There has to be a payoff. There’s no room for the iffy landing some books are allowed. And, yes, Simard lands it. By being something more than plain grief and realism, but never discarding them either, the ending works. It’s a novel that seems like it could be a jumble of tricks and quirks, but it’s something more. The bits that reside past realism, the antenna and its powers, the mysterious place in the woods, come to mean something sincere, allowing a catharsis that would not otherwise be possible. All of the secrets and lies are revealed, as are the painful reasons they were hidden, and the strange isolation of the town is made sensible. Simard wrote one of those books that perfectly suits itself: all of the elements, the prose, the characters, style, the structure, and the gambits work for the feelings and experience it aims to express, right through to the beautiful and haunting ending. mRb

P.T. Smith is a reader and writing living in Vermont. He is the coordinator for the Best Translated Book Award and has written for Full Stop, Three Percent, and Asymptote, among others.