The Courage of Elfina

A review of The Courage of Elfina by André Jacob

The Courage of Elfina is the captivating story of a teen who finds herself in a very adult situation. Elfina lives in the country on the banks of the Paraguay River. Her mother died in child birth, while her father is often away working on a large farm in neighbouring Brazil. Elfina attends the local school and lives with her grandmother. When Elfina turns twelve, her grandmother tells her that she will be going to the capital to live with the family of her father’s sister, Evoala. Her wealthy aunt has promised to enrol Elfina in a good school. But big surprises lie ahead. The family is not staying in Asunción, but moving to Montreal to operate a clothing import business. Aunt Evoala also changes Elfina’s name to Elfina Silva Rodriguez so that she will be like their daughter. But Elfina is never sent to school, nor is she treated like their daughter. Instead, she becomes their live-in maid and works around the clock, cooking and cleaning for the family of five. One day, fed up with the exhausting work and frightening home life, Elfina makes a run for it.

The Courage of Elfina is a graphic novel intended for young adults aged twelve to eighteen who are interested in social issues. The thin, sixty-four-page graphic novel also comes with information and statistics on forced child labour and a list of resources and websites for further reading. The book is intended “for reluctant readers,” which is also the tagline of the publisher. 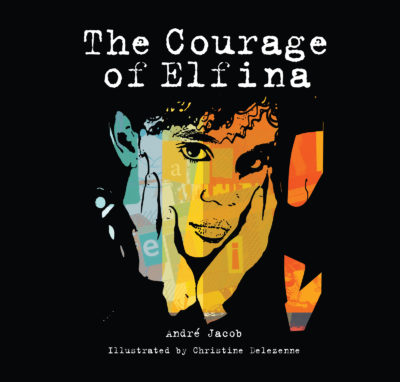 The author, illustrator, and translator of this story make up a stellar cast. Author André Jacob is a former UQAM professor and a guest lecturer on immigration, racism, and international development. Christine Delezenne is an award-winning children’s book illustrator, and Susan Ouriou is also an award-winning literary translator of more than forty works. However, it is the illustration work by Christine Delezenne that really takes the reader on Elfina’s journey. Delezenne skillfully uses panels in a variety of layouts to tell Elfina’s story and show the confines of her real and imaginary worlds in the daily toil of her life as a maid.

It is a shame that the illustrator, known for her drawings and use of texture, used only high-contrast black and white illustrations with pale blue halftones for colour. From the huge mango tree in the Paraguayan countryside, to the city of Asunción and the red-brick turrets of the family’s Montreal home, this story begs for colour. A broader palette would have also given the reader some greater contrast between Elfina’s life in Paraguay and her experience in Montreal. Some additional hues could have been used to evoke the teen’s psychological state, like her brief moments of happiness in the grocery store when she sees the fruit and vegetable displays that remind her of home.

Elfina is a compelling character that young people should readily identify with. She is ambitious, and when her personal boundaries are crossed, she pushes back and rebels. However, even though this story was intended for reluctant readers, the text itself offers very few opportunities for the reader to truly enter Elfina’s experience, as in this sentence: “On the bus taking me to the capital, I felt lost and sad”; or “I let myself fall under the spell of my old fantasies.” Although the story is written in the first person, the reader knows little of the sounds, scents, textures, and tastes of Elfina’s world, which could have easily been expressed using simple language. In the end, the text feels more like an outline than a novel.

The Courage of Elfina is an engaging tale to teach young readers about forced child labour right here in Canada. However, this story could have a much greater impact if it were fleshed out and if a wider variety of colours were used in the illustrations. The story itself was gripping, and I hope that one day it will become a full-length novel or graphic novel. mRb