The Darling of Kandahar

A review of The Darling of Kandahar by Felicia Mihali

The premise of Felicia Mihali’s new novel The Darling of Kandahar is taken from a real-life event. After a young woman appeared on the cover of the 2007 University Student issue of Maclean’s magazine, a Canadian soldier stationed in Afghanistan, apparently taken with the photo, wrote a letter that was printed in the magazine. The media began calling the cover girl “the darling of Kandahar.” Mihali fictionalizes this girl as Irina, a Montreal student who is asked to pose for the cover of Maclean’s and later receives an email with the subject line “Hello from Kandahar.”

This is Mihali’s first book written in English after publishing seven novels in French. It’s an ambitious book, considering its scope of topics: life as an immigrant in Quebec, religious beliefs, the historical founding of Montreal, and the human impact of the war in Afghanistan. But, perhaps meandering from idea to idea is an accurate portrayal of the mind of a 24 year-old girl, painting the world in broad, far-reaching strokes.

Seeing Montreal through the eyes of her parents, immigrants from Romania and Hungary, Irina describes the city with an outsider’s perspective, yet an insider’s insight, making interesting observations about the experience of immigrants living in Quebec: “Two solitudes is it? What happens, then, to the third one, the lonely immigrant side, left on its own or, even worse, caught up in political game and sacrificed in multicultural speeches?” 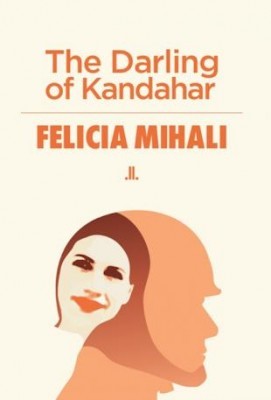 The Darling of Kandahar
Felicia Mihali

As a high school student, Irina and her best friend took pleasure in acting out religious plays about the missionaries who founded Montreal. The story of Jeanne Mance and de Maisonneuve, for instance, takes up several pages. Though a bit long-winded, the story is told in a charming way and demonstrates Irina’s ability to throw herself wholeheartedly into the stories of others. She is a character who lives in her head; she doesn’t enjoy going out with friends, and finds herself increasingly showing agoraphobic tendencies, like her mother.

Irina asserts on the first page that “Young women have stories to tell, too …” The stream-of-consciousness narrative can draw the reader in with its intimacy, but can also ring false at times: “I guess it’s time I told you about my family,” Irina self-consciously narrates. She walks us through her family history, failed romances, and current life as a university student, telling the stories of the people around her as a way to explain more of herself. Although perhaps lacking in stylistic elegance, the narrative captures Irina’s inner thoughts well. “You wouldn’t be wrong if you called me ordinary,” she says, and indeed some of her observations are mundane. Others grasp at something larger: “I still wonder about the briefness of things that can later on rouse huge emotions, when they do not destroy you. Ten minutes is long enough to kill a person.”

The temporary celebrity that comes with having her photo on the cover of a national magazine brings Irina a new self-awareness: “I felt like this kind of wave, just part of the mass of water in the sea for so long, and now suddenly here I was with my very own exi tence.” And it is in the resulting relationship between Irina and Yannis, the Canadian soldier in Afghanistan, that the book really hits its stride. Unfortunately, this doesn’t begin until more than halfway through the book, and the relationship isn’t given enough space to fully unfold. Theirs is not a straightforward romance; in fact, it’s not a romance at all, but a tense correspondence that is conducted entirely by email and fraught with misunderstandings. As a result, the reader may ultimately feel unsatisfied by all that is left unsaid between Irina and Yannis. mRb