A review of The Deserters by Pamela Mulloy

As a former soldier in the Iraq War, Dean knows he’s being trailed. He catches Eugenie, whose dilapidated New Brunswick farmhouse he’s been working on, following him into the backwoods of her property where he’s set up camp. He lets her in on his secret: he’s a deserter, and he doesn’t want her to turn him in. Stunned and uncomfortable, Eugenie promises Dean safety for the night. Then she kisses him (despite a husband living in Spain), immediately ending the possibility of continued security for either character.

“After war, having people close to him felt like a responsibility he was no longer prepared to take on,” writes Pamela Mulloy in The Deserters, her first novel. The line is part of Dean’s inner monologue, but it could speak for all three of the main characters, who have essentially cut themselves off from the rest of the world. They are reserved, traumatized people who struggle with vulnerability and honesty, who burrow themselves into their various projects in lieu of connecting with other humans. Eugenie, orphaned as a child and now presumably in her thirties, seems friendless. She has no clear aspirations, career or otherwise, outside of fixing up the house she inherited from her grandmother. Michael, her husband, has retreated emotionally since his brother’s death, and works obsessively with a Spanish artist on his marquetry, a type of ornate furniture design. He repeatedly deflects Eugenie’s questions of when he’ll return to Canada. 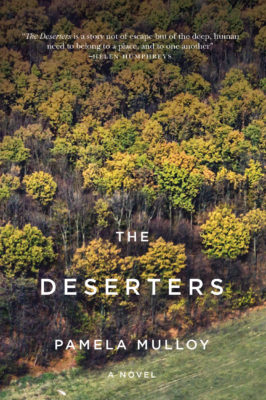 The house functions as a physical representation of Eugenie’s chance of shared domestic happiness – but with whom, if anyone, can she make a home? Dean isn’t quite her new partner – he’s her handyman and lover. The novel notes briefly that Eugenie pays Dean, but never shows their monetary exchange, which leaves unanswered the question of how they handle the awkwardness of mixing romance and business. As resource-poor as Dean is, I struggled to believe that financial considerations would not be a part of his inner dialogue.

His war flashbacks, however, succeed, as they neither valorize Dean nor romanticize soldiers or Iraqi war victims. Mulloy humanizes Dean and his army unit by depicting them as flawed people suffering through a wretched job where they have little influence. He aches for some of the men in his unit, but when Dean meets a friendly Vietnam deserter in New Brunswick, he keeps his distance. As Eugenie struggles to comprehend the toll that the war and living in exile have taken on Dean, their vastly different lived experiences emerge as a gulf between them. “He knew […] she didn’t understand that it was not an adventure he’d experienced. It was his life now, it was part of him, like his arm was part of him, or his heart.”

Mulloy explores the trepidations and vacillating intimacy between Dean and Eugenie with grace and acuity. The Deserters feels sturdy, the narrative evenly paced with no sharp turns. It is a novel about a failing marriage, an affair, war, and complicated family dynamics, but it’s more about lonely people who choose to weather their sufferings solo instead of developing sustained closeness. We see Dean’s paranoia and trauma, Eugenie’s anxiety over her marriage and a thrilling but insecure affair, but somehow, none of the characters are shown considering their loneliness, as if isolation is their default. All have deserted and are lost, and never learn how to stay found. mRb

Molly Zapp writes about literature and culture. Her fiction and nonfiction has appeared or is forthcoming in Newfound, Art New England, Seven Days, Cult Montreal, and Metro Silicon Valley.