A review of The Douglas Notebooks by Christine Eddie

“We exhaust ourselves traveling the earth, hunting for some treasure that will console.”

So begins The Douglas Notebooks: A Fable, the English translation by the masterful Sheila Fischman of Christine Eddie’s award-winning debut novel Les carnets de Douglas. And for all those weary literary wanderers out there, tirelessly hunting through bookshelves both real and digital, this lushly evocative work is indeed a long-searched-for consoling treasure.

A skilfully woven combination of magic realism, social commentary, and love story, The Douglas Notebooks transports the reader into the tale of Romain and Elena. Romain, born into a wealthy family who makes its billions from the profits of war, is the sensitive, unloved son who escapes into the forest to find peace. Elena, born into extreme poverty, escapes her murderous father and wanders from town to town, learning the mysteries of healing and finally finding love in the reclusive Romain whom she renames Douglas after the soaring coniferous trees in their forest home. 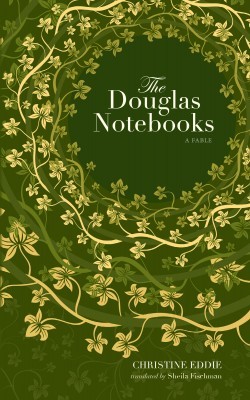 Eddie creates a world populated with wandering souls, benevolent strangers, evil parents, magical clarinet solos, untimely deaths, and bittersweet endings. It is a fairy tale world for adults evoking the themes of war, love, death, destruction, and reconciliation. So effectively does Eddie draw us into her creation that we never feel the need to locate ourselves in time or place.

It is a pleasant surprise to realize that the author’s tale is set in post- war Quebec. The pastoral landscapes and untamed forests are populated by our own twittering birds and majestic trees. The gossiping villagers, the local wise woman, the mysterious foreign schoolteacher, and the lovelorn doctor are all characters from the fictional town of Rivière-aux-Oies, but they could be from any small town tucked away off Highway 15 or Highway 10.

Eddie describes the death knell of rural Quebec: its transition from agricultural village to vacation destination to industrial wasteland, and finally to big box store address.

The fate of small-town Quebec is as important to this tale as is the love story of Douglas and Elena. With a light touch and lyrical language, Eddie describes the death knell of rural  Quebec: its transition from agricultural village to vacation destination to industrial wasteland, and finally to big box store address. The small town and its surrounding landscape was a refuge for the main characters, but, as the natural environment disappears, the characters realize that to survive they must leave home and start wandering again.

Eddie knows something about the search for a place to call home. Born in France to a Lebanese father and a French mother, she first moved with her family to Quebec and then to New Brunswick two years later. When she was twenty, Eddie moved again, returning to study literature in Quebec City at Laval University.

Eddie, who works as an editor for the Quebec government, has been writing for years, but she never thought that  this breakout novel would be published. In fact, the story was given to a friend as a gift, and it was only at the friend’s insistence that Eddie submitted it to a publishing company. As Eddie herself suggests, the gift she offered a friend became a gift for her too.

Eddie has written a modern fairy tale, full of magical moments and literary elegance, a veritable treasure for any reader who is hunting for a book that will console and inspire. mRb