The Secret Life of the Elderly

The Duchess of Cypress

A review of The Duchess of Cypress by Arleen Solomon Rotchin

Bette Davis said, “Getting old is not for sissies.” That much is evident as we meet the often hilarious characters who roam the halls of Arleen Rotchin’s second novel, The Duchess of Cypress. 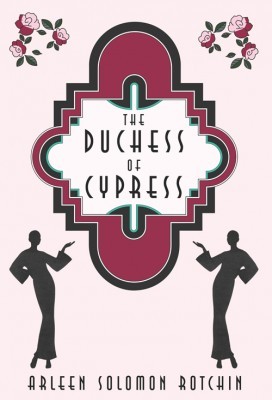 Our protagonist is Evelynn (a loud Eve and a quiet lynn), the retired owner of a retail fashion boutique that, for more than fifty years, has catered to Montreal’s “crème de la crème beau monde,” including prime ministers’ wives and William Shatner’s lovely mother. Feisty and energetic at age eighty-four, Evelynn is one of those women who refuse to go gentle into that good night. When young, she built her business with no help from her husband, a slacker, but a nice man who couldn’t keep his hands off her (“No one told me that’s not a reason to marry.”) But Evelynn grew worldly with experience, becoming a woman who knows her own mind and her worth: “I still date,” she tells the reader. “Why not, I’m not dead yet.” It is this device of speaking directly to us that draws us under Evelynn’s spell and makes the whacky sequence of events such fun to read.

As the story opens, Evelynn is living in a Palm Beach condo having handed her shop over to her son who calls every day. The condo co-owners are mostly seniors, many of whom she finds annoying, including the Toucher, a woman who “can’t speak unless she touches. Her mouth begins to move and right away her hand shoots up … Some people spit when they speak. She touches.”

Sharp as a tack where long-term memory is involved, Evelynn reminisces about her days buying from the big European couture houses, but she is a little forgetful about more recent events (like when she reports her drapes being stolen and then finds the dry cleaning bill). She does not, however, forget when she’s been wronged: Someone has been jiggling the handle of her front door, and Evelynn suspects the Toucher – “the one who stole my boyfriend.” Not that she wanted the boyfriend, who, despite being ninety-five years old, was “a hot commodity” in the condo. Yet when the Toucher approaches her one night at the opening of an art exhibit, Evelynn punches her in the nose. “Yes I did,” she boasts. “She stole my boyfriend … It was a little punch. I’m an old woman so I couldn’t have given her such a terrific wallop but she yelped like the dog she is.”

Throughout this entertaining window into what may lay ahead, Evelynn continues bopping us with one-two punches, keeping us wondering what could possibly happen next. Will the romance with Dr. Zimmer, he of the mothball-smelling suits and the fondness for calling her ‘Toots,’ flourish, or will he take up with the redhead from the fourth floor who demolished the Christmas poinsettias using a rolled-up copy of The Jerusalem Post? Will Evelynn find true love in Lakeland with Si, with whom she clicked the moment they met? You can’t help but root for her because she gives truth to the Helen Hayes quote with which Rotchin begins her story: “Age is not important unless you’re a cheese.”

Gina Roitman is a writer, editor, and author of the acclaimed short story collection Tell Me a Story, Tell Me the Truth, as well as the co-producer and co-writer of the award-winning documentary My Mother, the Nazi Midwife and Me.