So Many Possible Elsewheres

The Edge of the Precipice

A review of The Edge of the Precipice by Ed. by Paul Socken

In his opening paragraph, Mark Kingwell acknowledges the problem inherent in his contribution to The Edge of the Precipice: Why Read in the Digital Age?, a new essay collection edited by Paul Socken. Kingwell is – in concert with Socken, a professor emeritus at Waterloo University – preaching to the choir.

As for the rest of the congregation, they’re clearly a lost cause. If you’re not a dedicated reader of serious literature, as bestselling author Kingwell points out in “Language Speaks Us: Sophie’s Tree and the Paradox of Self,” “then you are probably not reading this and words are at a loss. There may be ways to reach you, the non-reader, but this is not one of them.” 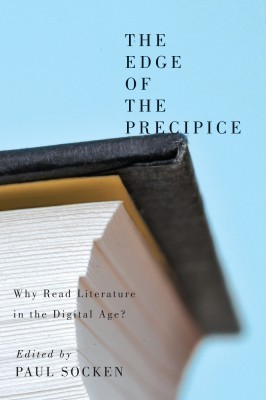 The Edge of the Precipice
Why Read in the Digital Age?
Ed. by Paul Socken

Which is for the best since any so-called non-readers, who happen to pick up The Edge of the Precipice, will probably feel a little insulted. I’m a reader and often I felt insulted on their behalf.

The snobby mood is set in essays like Leonard Rosmarin’s unapologetically imperious “How Molière and Co. Helped Me Get My Students Hooked on Literature.” Rosmarin, a professor emeritus of French literature, recounts how he came out of retirement recently to berate his undergraduate students for wasting their time on rockers, rappers, and the Internet. His sole purpose seems to be to make his students feel stupid. “I will not tolerate overgrown bedwetters in my classroom,” he says, by way of introduction.

Fortunately, it’s the shifting moods, even the split personalities, of The Edge of the Precipice – from despair to arrogance to hopefulness back to despair – that make reading this collection an interesting, if, occasionally, infuriating experience. In “A World without Books?,” librarian Vincent Giroud wears his ambivalence on his sleeve. He’s well aware that old-fashioned books are becoming a thing of the past; at the same time, he defiantly renounces the digital future:

Holding a book in my hand or on my lap and turning its pages is a pleasure I am not prepared to give up, much in the same way as I would not be tempted to ingest my food in the form of tablets…. When the time comes to be fed through a tube, I will be ready to leave this world, and I am tempted to say the same about the world of books.

It’s fortunate, too, that not everyone in The Edge of the Precipice is ready to jump off the cliff – just yet. In “Solitary Reading in an Age of Compulsory Sharing,” Drew Nelles, former editor-in-chief of Maisonneuve magazine, eloquently defends the unique brand of alone time that reading allows. Along the way, he takes some well-deserved shots at book clubs and ubiquitous review websites like Goodreads.

Tones also shift in The Edge of the Precipice and while Socken, a long-time academic, seems predisposed to include the perspectives of his fellow PhDs, he thankfully makes sure his colleagues steer clear of jargon and convoluted literary theorizing.

Even so, the best essays in the collection tend, not surprisingly, to be less scholarly and more personal. In “The End of Reading,” veteran literary critic Alberto Manguel recalls how, during a two-week stay in hospital, he found comfort in the companionship of one great book:

I am deeply grateful to my Don Quixote… the twin volumes kept vigil with me…. They continued a conversation begun ages ago, when I was someone else, as if they were indifferent to time, as if taking for granted that this moment too would pass.

In “A Very Good Chance of Getting Somewhere Else,” Montreal poet Katia Grubisic champions “the chaos of discovery” that’s uniquely available in print on paper. It’s the kind of revelation that makes the old-fashioned act of reading still seem like a perfected and indispensable technology. Of the three-dimensional presence of books in libraries and bookstores, in her home and her life, Grubisic writes: “The physical presence of so many possibilities is irreplaceable…. There are so many possible elsewheres.” mRb