The Experience of Meaning

A review of The Experience of Meaning by Jan Zwicky

My friend picked up Jan Zwicky’s The Experience of Meaning for me on the morning I had what I thought might be the first signs of labour. Were these period-like cramps early contractions, I wondered? What is labour and how do you know when are you in it? It’s a question thick with meaning; reading Zwicky’s book in this liminal time changed the way I thought about and sought to answer this question.

For those who know Zwicky’s work, the territory she covers here is familiar, part of her lifelong project of writing against the trends of twentieth and twenty-first century Anglo-philosophical traditions that have been narrowly tied to logical, rational, or analytic thinking. Zwicky connects the “airless explicitness” of that philosophy to our technocratic culture and a societal incapacity to intuit meaning. Zwicky’s campaign, if successful, would broaden our understanding of what constitutes thought by adding gestalt thinking to our philosophical toolbox.

Gestalt means shape or form, and gestalt thinking is the perception of a whole – a human face, a piece of music, a hockey game, an ecosystem, or, I would argue, an experience like giving birth – that is not explained by summing up its parts and can’t easily be reduced to words. The tendency to look to parts – words chosen, notes played, centimetres dilated – to explain a thing typifies our technocratic age. My partner and I repeatedly asked Google if my symptoms meant I was going into labour, with inconclusive results. Much is obscured, Zwicky argues, by analytic thought. She writes,

“This neglect [of gestalt understanding] reveals itself not only as deafness to poetry and blindness to environmental crisis; it has penetrated deeply into many aspects of our intellectual, moral, and political lives and become part of our self-understanding.” Unlike her earlier, more formally experimental works likeWisdom & Metaphor and Lyric Philosophy, this book is a collection of essays. Even if she illustrates her ideas with sometimes erudite or dated examples (Wayne Gretsky as the gestalt in sports, for example), the writing is stark, lucid, and evocative. 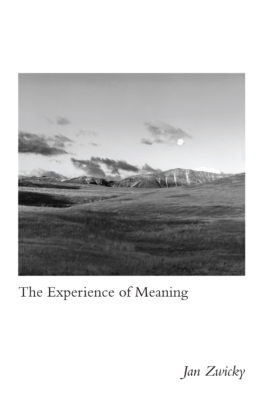 The Experience of Meaning
Jan Zwicky

A week after picking up the book, we were admitted into the hospital, where the doctors soon administered a labour-inducing drug called pitocin. After five hours of world-obliterating contractions, the doctor examined me and explained that since I had only dilated to three centimetres, I wasn’t in labour yet: a devastating diagnosis. After the doctor left the room, our doula looked into my desperate eyes and said don’t listen to her, you’re definitely in labour: we can see that much.

Gestalt insight depends upon two types of seeing: seeing-as, where one perceives similarity between two apparently different structures, as one does to appreciate metaphor, and seeing-in, where one intuits the inner structure of a thing. This emphasis on sight conjures one of the oldest questions in philosophy: what is seeing? At issue is whether what we see is mind-independent because it “really” exists out in the world, or mind-dependent, meaning it could exist in our minds only – potentially a fabrication, rather than an observation. The latter scenario suggests that seeing must be treated with deep skepticism, and this is the fate of much gestalt insight, especially because it resists explanation. We can be skeptical, even, of our own experiences. Lacking any objective measure for pain, I initially wondered whether it was “all in my head.” Eventually, though, the pain was all there was: this was the realm of T.S. Eliot’s “wordless thought,” where there was no “me” left to do the doubting.

The Experience of Meaning paints a troubling portrait of our age. Unmitigated allegiance to rational, technocratic logic has annihilated our ability to perceive meaning. To revive this capacity would mean seeing our world anew. Not needing words to describe it or objective measures to assess it, we would be able to appreciate the integrity and wholeness of music, poems, biospheres, or even the liminal, outer- worldly process of ushering new life into this fragile and broken world. mRb