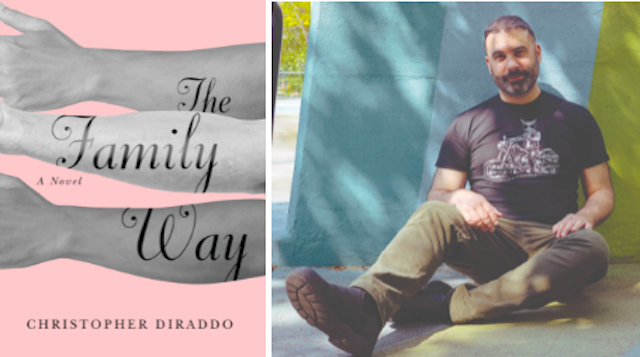 Calling Christopher DiRaddo a busy man would be an understatement; his smiling presence is everywhere in Montreal’s Anglo literary scene. He’s the founder, organizer, and host of the city’s premier queer reading series, The Violet Hour, and also runs its popular spin-off book club. He did programming work for the Blue Metropolis International Literary Festival for many years, and has only recently stepped down from his position as President of the Quebec Writers’ Federation. On top of all this, he has written two well-received novels. His CV is, to say the least, impressive.

DiRaddo’s moving first novel, The Geography of Pluto, followed the turbulent romantic life of a gay Montreal teacher while he struggled to deal with his mother’s cancer. That novel’s exploration of the ties binding people together is given further elaboration, and contemporary twists, in his new book, The Family Way. Before proceeding, I should, in the interest of full disclosure, acknowledge that DiRaddo and I have known each other for some time and are close friends. Thus, while I reflect on the book’s concerns, style, and technique, I will offer no summative evaluation here: no thumbs up or down. 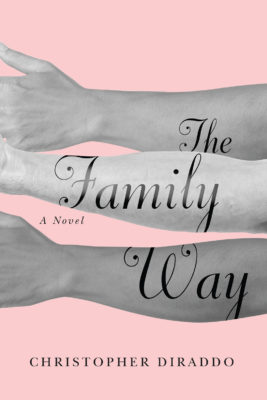 The novel picks up the questions of family that were present in Geography, and puts them at the centre of the narrative. In The Family Way, forty-year-old Paul, who lives a well-drawn and recognizable urban gay life, is approached by lesbian friends and asked to donate sperm to help them have a baby (an event that has autobiographical roots for DiRaddo, though these are not important to any reading of the book). That request begins the book’s moving consideration of the many forms and meanings of family, a variety of which are lovingly detailed in the plot as our protagonist and his friends dine, chat, share their lives, and support one another through good times and bad.
Is “father” a biological status, a legal one, an affective one, or some far more complex, nuanced combination of things?

Near the book’s beginning, Paul and the lesbian couple discuss the nature and limits of his role as donor and his potential involvement in the child’s upbringing, while also parsing the ties that already exist between them. Eve, one half of the couple, says: “We won’t be using terms like dad or father to describe your relationship,” and later concludes: “You can have as much or as little involvement as you like […] but it’s important for us to know where you’re coming from.”

This question arises again later, when Paul tells his partner Michael about the conversation with Wendy and Eve, and Michael asks, “What’s the big deal? Why not call you the dad?”

Questions like this, about the fundamental nature of relationships and human closeness, are the heart of Paul’s story as it tracks the intellectual and emotional stakes of issues like: Is “father” a biological status, a legal one, an affective one, or some far more complex, nuanced combination of things? What exactly would fathering a child with a good friend mean to Paul; what would he want from the experience? And what exactly – and most importantly – constitutes a “real” family?

Asking and attempting to answer such questions are The Family Way’s thematic substance. This is most evident in such explicit discussions between characters, but it also underpins the book’s structure.

Played against the parental choices and decisions facing him are Paul’s relationships with his sister – who, in another interrogation of family norms, is found to be involved in an adulterous affair – and with a close-knit circle of friends, largely gay men, that is the real nucleus of his life. The juxtaposition of this group against the couple’s desire to establish a traditional family of parents and child introduces the notion of “chosen family,” which has been central in the lives of queer people since the earliest years of the LGBTQ+ movement. Queer people, so often faced with rejection by their birth families, have depended on the friendships they build to take their emotional and social place. Though Paul is not alienated from his biological family, the novel makes the importance of his chosen family very clear. Since he modelled two different possibilities of family (biological and chosen) in his new novel, I asked DiRaddo if he would like to expand on those possibilities a bit: How are chosen and genetic families the same? How are they different? And how did he see them operating together, or in opposition, in queer life?

The first time, it’s by our parents or guardians. The second time, it’s by the community. I may have been born gay, but I had to learn about my queer life and traditions. I was lucky to have wonderful parents. They gave me my values and raised me to be kind and gentle and a citizen of the world. But when I came out, I had to learn a whole slew of other things. It was my new friends (who would become my chosen family) who educated me. I learned all about pride and activism and human rights. I learned about sex and love and relationships. I discovered Bronski Beat, Armistead Maupin, and Donna Summer. When you’re a queer person you exist between these two families. Sometimes they’re in sync and sometimes they’re at odds, but I still care deeply for both of them. I find that spectrum interesting.

That idea of a “second education” is given sensitive, insightful treatment in The Family Way, a treatment whose detail and emotional power necessarily opens up other matters. I find myself wondering about the nexus of family and community. DiRaddo himself has been extremely active in the queer, literary, and queer-literary communities, and so much community service is an example of caring and mutual support, of standing by one’s people, which seems to be connected somehow to ideas of family. So I asked him how he saw the notion of community and how, and why, it is important to him. He answered:

I’m not completely sure, to be honest. I grew up Catholic and an altar boy. My parents were super involved in their small community church, organizing dances and throwing fundraisers. Sometimes I’d serve meals at spaghetti suppers or help deliver Christmas baskets. Those formative experiences are probably part of the reason I began volunteering at CKUT and working for Divers/Cité (Montreal’s defunct LGBTQ pride celebration). I understood the collective good that could come from abandoning your ego, pitching in and doing something nice. I suppose that philosophy continues with my literary activities. I love creating opportunities for strangers to come together and making lasting connections.

This deep sense of connection to one another, so clear in DiRaddo’s reply, is equally present in The Family Way, and one of the book’s charms lies in the fact that while dealing with such heady issues, it never falls into the earnest, or the grim, but remains light-hearted even while handling them with seriousness. Consider another discussion from the narrative about what the child might call him: “uncle” is suggested, or alternatively, in a humorous nod to his being the sperm donor, “spunkle.”

This recognition of the complexity of our shared humanity – its demands, joy, and infinite possibilities, whose “livedness” comes across on every page – is what we take away from this remarkable read. And given that the quest for family and community may be one of the few truly universal human experiences, it is also a reason the book is sure to resonate with a vast range of readers.mRb