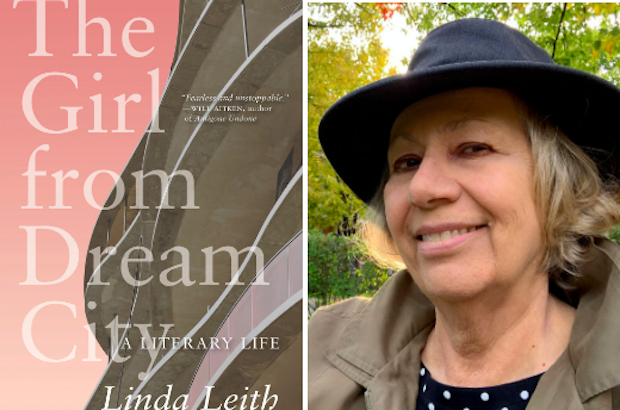 The Girl From Dream City

“All serious daring comes from within,” said Eudora Welty, and life holds both risk and possibility for women who dare to dream. This adage holds true for the accomplished Linda Leith, who was named to the Order of Canada for her contribution as founder of the Blue Metropolis International Literary Festival. Under her leadership, Blue Met became a world-class literary festival, giving voice to both local and international authors.

In addition to directing Linda Leith Publishing, she will soon launch her eighth book, The Girl from Dream City, an intimate and engaging story of her journey from a challenging girlhood in Northern Ireland, to her education in some of Europe’s most captivating cities, and on to becoming a novelist, translator, and one of Canada’s leading literary curators.

How did she do it?

This is one of my questions as we greet each other early in the new year over Zoom, while the COVID-19 pandemic still rages in Quebec.

Leith’s childhood in Northern Ireland was difficult, shrouded in silence, secrecy, and stigma. Her physician father grappled with bipolar disorder, then known as manic depressive illness, and was volatile and unpredictable. “Inspiring and dazzling as he was, there was always something about him that was too much,” she writes in The Girl from Dream City.

Her father’s mood swings and rages resulted in hospitalizations and loss of his job, while constant moves made stable friendships a challenge. Leith felt her family lived in a bubble; secrecy was the air she breathed, “colourless and odourless as carbon monoxide.” 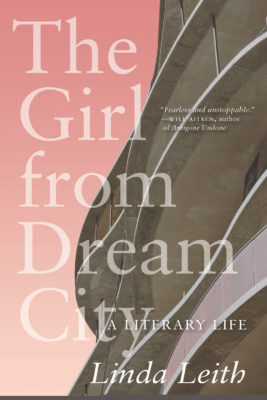 The Girl From Dream City
A Literary Life
Linda Leith

Paradoxically, this climate shaped her in positive ways. Books were companions and escape. Her mother, a teacher, taught her to read and made sure the house was filled with books. Leith writes, “It was a good childhood for a writer. I learned to be observant, and to make up stories to explain the situation I was in. […] And I learned to be patient […]. Just look how long it has taken me to piece it all together.”

Looking back, Leith realizes it was the silence that enabled her to become a writer. As the Polish poet Wisława Szymborska says, “When I pronounce the word silence, I destroy it.”

My favourite element of The Girl from Dream City is Leith’s exploration of the mutability of memory: What does one remember? What does one forget? How does hindsight help to put the pieces of a life together?

“My life felt like a mystery, and my book is structured like a mystery,” she explains during our interview. “So many of our memories are hidden away, but writing teases locked doors open.” Leith describes the writing of her book as “an exploration… an attempt at saying what I don’t yet know, what I don’t know any more, and what I had no way of knowing. A glimpse at what I have become. A prelude to whatever comes next.”

In chatting with Leith, a theme emerges: resilience. Whenever possible, Leith transformed painful, even traumatic experiences into strengths. It’s a gift, perhaps even the foundation of her esteemed career. Talking with Leith, I’m struck by both her optimism and her humility.

During the family’s calm, happier time in Basel, where Leith’s father reinvented himself as medical director of Sandoz, he showed his six-year-old daughter an ad he’d designed for a new anti-anxiety drug. She was captivated by the image of the reflection of a forest in a mountain lake. In fact, her father became her first role model. Just as he edited medical journals, she too wanted “the life of an editor.”

As a teenager in Pointe-Claire and the eldest girl in a family of eight, Leith was responsible for making the household run smoothly. “School was a refuge for me,” she says. Nurtured by several teachers and with a role in a successful school production of Euripides’s The Trojan Women, she came into her own. As production assistant, she honed leadership skills that stood her in good stead.

So many of our memories are hidden away, but writing teases locked doors open.

Leith began to view her own struggle as an opening to express herself in a new light. At McGill, she was inspired by Germaine de Staël, a salonnière. Leith loved the idea of gathering talented people together to talk about books, theatre, art, and politics.

During a summer job at Manoir Richelieu, Leith met Andy Gollner, a Hungarian refugee and student of political science at Loyola. She was drawn to Andy, to the Hungarian language and culture, as well as to his warm extended family, and the two married in 1974. Leith’s life was full, teaching in the English Department at John Abbott College and raising three boys. However, the claims on her time meant her literary dreams were deferred.

Opportunity eventually came in the form of several grants during the 1980s and 90s. The Canada Council funded a project to write about Mavis Gallant, whom Leith admired. She wrote to Gallant with a few questions, and later sent the author her finished piece from Montreal Review with a note. Relieved that the sometimes testy Gallant was pleased with the article, Leith went on to meet her in Paris. Rapport built over a bottle of Tio Pepe, and the two women went on to correspond and visit when Gallant was in Montreal, or Leith in Paris.

A Quebec grant providing a three-year fully paid leave of absence “demystified the literary world and gave me the opportunity to get to know many writers,” Leith writes in The Girl from Dream City. She devoted herself to the study of minority English writers in Quebec, not only the big machers – Hugh MacLennan, Mavis Gallant, Mordecai Richler, and Leonard Cohen – but younger writers no one had paid much attention to. An article for Canadian Fiction Magazine on Quebec’s English-language writers grew into her first book, Telling Differences: New English Fiction from Quebec, published by Véhicule Press in 1989, followed by a monograph for ECW Press on Hugh MacLennan’s Two Solitudes in 1990.

Leith’s career dovetailed with a larger movement to support Quebec’s Anglo literary community, which resulted in the creation of two organizations in the late 1990s. The Quebec Society for the Promotion of English-Language Literature (QSPELL) celebrated the best books published by writers working in English. The Federation of English-Language Writers of Quebec (FEWQ) ran workshops and readings. The two organizations merged into The Quebec Writers’ Federation (QWF) in 1998, the cornerstone of our current literary community.

By now a single mother, Leith joined forces with writers Ann Charney and Mary Soderstrom to plan a literary event called Write pour écrire, which took place on Halloween night in 1996, a year after the divisive referendum. The authors were flabbergasted by the superb, diverse turnout.

The success of Write pour écrire convinced Leith there was a place for an international literary festival in Montreal. Launched in 1999, Blue Met became one of the biggest and most vibrant literary festivals in Canada. The festival drew writers from every corner of the world and yet “could have come into existence in no other city,” emerging from a uniquely Montreal cultural and political context. “Before Blue Met, Canadians rarely read writers in languages other than their own,” Leith points out during our discussion. The festival built bridges between francophone and English-language authors as well as writers from marginalized communities.

In any given year, writers were invited in half a dozen or more languages to address audiences in translation – but also in their mother tongue. Leith remembers three Afghan poets who read in Dari with about forty Dari and Farsi speakers from Afghanistan and Iran in the audience. The memorable onstage conversation between Maryse Condé and Dany Laferrière in 2003 was the first time the salon was packed with Black writers from Haiti, Guadeloupe, Jamaica, Trinidad, and St. Thomas. Blue Met has also featured writers working in Yiddish, Italian, Mohawk, Portuguese, Slovenian, Inuktitut, Spanish, Haitian Creole, and Vietnamese. The list goes on.

The title of Leith’s book comes from Pauline Kael’s description of Cary Grant as “The Man from Dream City.” Like Grant, Leith possesses a sui generis accent that can’t be traced to a particular place. Her international upbringing meant that she came from everywhere and nowhere. Leith refers to Zadie Smith’s description of Dream City in her essay “Speaking in Tongues” as “a place of many voices.” Leith is proud to be a citizen of Dream City.

These days, Leith is happily settled in her second marriage and heading up her eponymous publishing company. “I have another book in mind which is in an embryonic state,” she says. Writing is still a joy and a process of discovery. “Someone new emerges whenever I break the silence.” mRb