A review of The Giulio Metaphysics III by Michael Mirolla

The Giulio Metaphysics III is written by Michael Mirolla, an accomplished Canadian novelist, poet, playwright, and consulting editor at Leapfrog Press. It is an experimental book that calls itself a series of “linked tales” about a character named Giulio – but is it always the same Giulio? The reader is not sure whether it is a novel or a collection of stories. 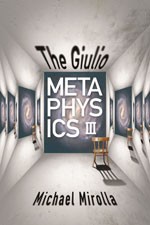 Giulio is an urban creature, sometimes denizen of Montreal’s Park Ex avenues, sometimes wanderer of Möbius-like Dali timescapes. His conversations with neighbourhood oddballs bounce between blue-collar lewd and intellectual puns. We’re not sure where Giulio fits on that spectrum, or what he does when he’s not having these conversations.

The character with whom Giulio interacts most intensely is the author, who addresses himself from the story(ies) as a low-level Olympian god, delighting in his power and its application:

And he tries to turn back several times before I finally force him to ring the doorbell—pushing his clenched fist against it after a battle of wills he knows he’ll lose. I remember him thinking (having him think): “Jeez, it still sounds the lively tune of a Trantella Siciliana.”

Giulio eventually rebels and refuses to obey the author. True to form, the flawed and spiteful god seems to say, “You don’t want to listen to me? I damn you to wander!” and from this point on Giulio drifts through disjointed situations without knowing where he is, or how he got there. What’s more, he doesn’t much care; apathy is one of his defining characteristics. Is it always the same Giulio? When you are defined by six letters and passive behaviour, what’s the difference?

Many of the book’s chapters (stories) were previously published in literary reviews. They use a range of perspectives: first person, third, second. Some chapters are screenplays, some are free-form text blocks with few paragraph breaks. One chapter is like a choice-based video game from the 80s. It’s not an easy read. The vignettes include conversations with a Kafkaesque cockroach that crawls out of a toilet and visits to scenes that may or may not have been abuse from Giulio’s childhood. He slides through time, visiting his family home before arriving in a cell with a porthole and a table that feeds him comfort food.

If a series of stories (chapters) about a character with the same name, responding to the same crisis, walks like a novel and quacks like a novel, it must be a novel. The author is clearly talented and able to operate in a wide range of styles. Some of the inter-sentence thought-play is masterful and the Prologue is a poetic invitation to fall through formlessness. Giulio’s rebellion, the book’s central conceit, is problematic in that directing characters to do (interesting) things and making them fit a larger narrative is a novelist’s primary task. Refusing to perform it can make the reader feel as though they are on a tour with a guide who won’t explain anything, but who never stops talking. Turning one’s back on a character is an interesting twist, but doing the same to the reader is not.

The author’s invitation to fall with him into Giulio’s psyche carries an implied contract: arrival at a deeper understanding of that character, or, at least, a fun ride. For this reader there was not enough of either to call the experiment successful. That said: literature is about choices. In the case of experiments we must also consider what is accomplished, and what is contributed to the genre by the attempt.