The Goat in the Tree

A review of The Goat in the Tree by Lorne Elliott

Where do we draw the line between storytelling and lies? Can a good story veil (or protect) reality while revealing a larger truth? And what is the responsibility of the storyteller to his audience?

In his second novel, The Goat in the Tree, Lorne Elliott – comedian, award-winning playwright, musician, and Hudson resident – playfully poses these questions, wrapping them in a tale about a storyteller whose talent for fabrication is his ticket to ride. To sweeten the plot, Elliott adds parables and fables as guideposts to the characters we meet along the way.

The journey opens in Essaouira, Morocco, where our hero has come from Paris and is living a life of freedom and, accordingly, poverty.  “Wealth, I’ve always observed, hardens one’s opinions,” he muses. In short, he’s open to all possibilities. 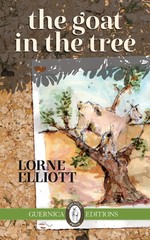 The Goat in the Tree
Lorne Elliott

Enticed by the smell of food, he crashes a party by posing as an invitee and then earns the right to stay by spinning a tale that bamboozles the host and most of her guests.  Our protagonist (who goes by various pseudonyms throughout the novel) does this with ease, never failing to give credit to his Muse, who, metaphorically speaking, always lurks nearby.

Ready to move on, the young man poses as a guide on a tour bus and hitches a ride to Marrakech. Along the way, he entertains his captive audience by mixing cobbled-together factoids with a couple of folkloric tales, including The Goat in The Tree: “It was the best story I had ever told. Like nothing I had ever heard before…. they were riveted.”

In Marrakech, the storyteller meets a young woman, an academic researcher of folkloric tales who is in town for a conference. It’s love at first sight … for him. She, however, is in love with her boss – a plotline that is hobbled by too much information, at times, and, not enough, at others.

Elliott has a gift for crafting a scene, gently drawing you into its landscape. Anyone who has ever travelled to North Africa will instantly be transported by his descriptions of walking through Djemma el Fna, Marrakech’s famous souk. Best of all, the aphorisms, fables, and tales he spins have a genuine folkloric air to them that often ring truer than the novel’s core story.

Throughout the book, the narrator struggles with his conscience over where to draw the line between what is a self-serving lie and an entertaining story. He often judges himself as harshly as he judges others (then quickly forgives himself). When his Muse suddenly disappears, he understands that he has crossed the line and must make amends.

Although the fable of The Goat in The Tree is referred to throughout the novel, Elliott’s narrator never relates the story, the one said to be his best. As the narrator’s tale draws to a conclusion, we learn details of his departure from Paris for Morocco, but his reasons for leaving, like this book’s eponymous tale, remain a mystery.