A review of The Grand Melee by Michel Tremblay

At The Grand Melee’s climax is a wedding, animated by “food in industrial quantities; music all day long; dancing; plenty to drink.”  As the mother of the protagonist explains, “You just get married once, Nana, and if the honeymoon doesn’t last and you’re stuck with an asshole for life, at least you’ll be able to say it was a fantastic party!” The pragmatic but also raucous tone of this advice encapsulates Michel Tremblay’s earthy yet tender perspective as he outlines characters who are vital, engaging, and imperfect.

The novel is the fifth in Tremblay’s “Desrosiers Diaspora” series; the other four titles have previously been translated and published by Talonbooks. Tremblay’s popular 1978 novel The Fat Woman Next Door Is Pregnant (the first in his Chronicles of Plateau Mont-Royal series) introduced the character of Rhéauna or “Nana,” modelled after Tremblay’s own mother. The Desrosiers Diaspora series consists of nine interconnected books providing context into Nana’s childhood and adolescence, as well as the stories of her family, with a particular focus on her female relatives. 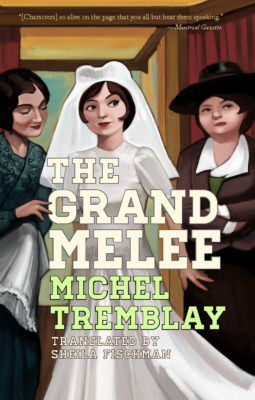 The Grand Melee is set in 1922, in the lead-up to Rhéauna’s wedding. Despite her financial challenges, Rhéauna’s mother Maria is determined to give her eldest child a festive celebration, and the scope of the event spirals out into a number of narratives set in locations ranging from Saskatchewan to Ottawa, including Nana’s aunts, great-aunts, siblings, and cousins. Meanwhile, another subplot explores a long-buried family secret amongst the relatives of Nana’s fiancé, Gabriel. The individuals and storylines converge at the wedding celebration, marking a moment of frenetic rejoicing even as the scars of the past continue to linger.

Most of the plot events are unremarkable, and yet they conjure up a vivid specificity of time and place. Tremblay evokes a moment in Montreal’s history that teeters on the brink of modernity, such that a character can complain, “they can’t put the streetcars and the horses on the street at the same time! Makes no sense!” Specific streets and locations, ranging from the glamorous Ritz Carlton Hotel to a modest bakery selling cookies “somewhere on rue Ontario near Amherst,” allow readers to vividly conjure up the spatial experiences of characters as they move through the cityscape.

The translations of the first three novels in the series all featured “crossing” somewhere in their title (Crossing the Continent, Crossing the City, and A Crossing of Hearts), and both the literal steps and internal, personal histories of myriad characters continue to crisscross and intersect in this text. A “melee,” however, suggests a more chaotic and potentially even violent convergence. As Nana crosses a key threshold into adulthood, influences and conflicts from the past collide; stories and characters that had spread out into the fragmented diaspora evoked by the series title are now pulled back into one another’s orbit.

This convergence is where the impact of Tremblay’s novel is truly felt. Whether it is a wedding, a Christmas feast, or an attempt at a family dinner, gatherings in the novel often descend into chaotic confrontations as long-buried secrets and unspoken truths rise to the surface. Transgressions range from the quotidian to the genuinely shocking, and the pressures of daily life sometimes render characters casually cruel to one another. This backdrop becomes the canvas for Tremblay to display his much-lauded skill at evoking the subtleties of individuals and the bonds between them. The melee alluded to in the title is actually a piece of music, composed to mark “the union of the two families … being accomplished in music.” The integration of one individual into a family, let alone the conjoining of two different families, can become an occasion for conflict, but it also creates scope for depictions of deep tenderness, and ultimately, fodder for great art.mRb