The Future at the End of the World

A review of the half-drowned by Trynne Delaney

Trynne Delaney’s novella, the half-drowned, takes place in a future we don’t have to try hard to imagine, where the “oceans stopped rising with water but keep rising with plastics and memories.” Of the only people left on the planet, the narrator explains, “We became stolen people on stolen land. And so we stayed when everyone who could left for the sky.” What remains is an ecosystem and community in which humans, rocks, waters, aliens and angels all speak through and with each other.

The story revolves around three characters and their relationship to Rites, community, and each other. In this reality, Rites are a way of connecting to history: they are a ceremony and a procedure, involving mushroom tea, a brainstem simulator, and gold grills to mark the occasion. LaVon recently lost his partners to the dying season and has not been himself since Rites. His sister Harbour is preparing for Rites, trying to understand what is going on with LaVon, and debating whether or not to ask her ex-lover for a precious bracelet back. Kaya, Harbour’s ex, is a being who arrived as a baby, alone on the shore. She is part of the community but also seen as an outsider.

Old folks in this world speak of a time in which their homes were pushed “between a pulp mill, oil refinery, and a nuclear power plant,” referencing the reality of environmental racism we know today. Ancestors also pass down knowledge and grief connected to the trans-Atlantic slave trade, the Underground Railroad, and the conditions under which members of the African diaspora arrived in the Maritimes and survived. However, Rites impart a more profound, mind-altering awareness of the place they occupy, their ancestors, and histories “that weren’t spoken of with children, except in whispers or subtle implications.” 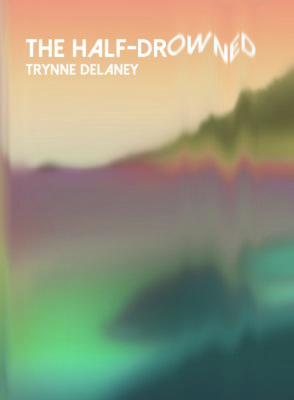 After Harbour’s Rites, a question arises: “What’s worse? To remember your loss or not know what you’ve lost?” More than a question of growing up or history, it is about relationships, which are a central, propelling force of the half-drowned. With a light and poetic touch, Delaney portrays the tension, grief, longing, and love that soak relationships between people and place – between history and future. These are relationships trying to survive at what feels like the end of the world, which also makes space to consider how to vision a future from within that feeling.

Saidiya Hartman asks, “What is required to imagine a free state or to tell an impossible story?” Delaney seems to be engaging with the same question. Like Hartman, they are negotiating a relationship between the past, present and future. As each character confronts their desire to know more about their personal and collective histories, Hartman’s idea that the “loss of stories sharpens the hunger for them” is felt deeply and differently, which is part of what makes the half-drowned so compelling.

Grounded in the physical details of the Bay of Fundy, the setting is fully felt in Delaney’s beautiful prose. We see “Blue, grey-green ocean hitting Fundy red land and spitting up rainbows of trash”. As Harbour navigates the muddy shore in search of gold to be melted down for her grills, she is in total darkness, but the smell of the beach, the texture of the air, the sounds under her feet permeate the text. From the titles of each chapter to the rhythm of each sentence this book is a sensory experience: it sinks you in.

Delaney’s narration is polyvocal – at times a we, at other times an I.  It is a morphing omniscience, moving through LaVon, the water, the rocky shore, the absence-presence of ancestors, aliens, and angels. While this aspect of the novella may sound disorienting, the world and the story are not obscured by a shifting narrative voice. Delaney shows deft control with intuitive pacing that seems to answer questions as they may arise. Elements are weaved together with the kind of wisdom that makes you want to underline passages and carry around so many moments from this incredible work.

the half-drowned opens with a full-page image. It looks like a rocky shore turned on its side, with round, translucent spotlights around names and words. In the shape of a rock, the night sky appears wedged between shore and water. On Instagram, Delaney explained that this image is a map. Ancestors at its center, it is multi-dimensional, introducing characters, setting, time. It is a vision of connections and pathways. So although elements of the book may feel dystopian, this is not dystopia. The future may be undetermined and wavering, but even at the outset, we are told: “Sometimes what you thought you lost resurfaces. And in these glittering moments, sometimes we choose to see good omens—the planet returning to some future whole.” mRb