How to Be a Bad Dad

The Handbook to Lazy Parenting

A review of The Handbook to Lazy Parenting by Guy Delisle

Originally from Quebec City and a graduate of Sheridan College, Guy Delisle is a bestselling and award-winning cartoonist who lives with his wife and two children in France. Although his work is well known in comics circles, he is better known in la Francophonie, where bédéistes are held in higher esteem than in the English-speaking world. Since 1996, he has published twenty-two books, eleven of which have been translated into English. The comic artist has a wide range of work from the objective, journalistic account of Hostage, Christophe André’s story of being kidnapped in Chechnya, to his highly acclaimed graphic travelogues, to his lighter, humorous comic strips on parenting. The cartoonist refers to the latter as his “Bad Dad” series. The Handbook to Lazy Parenting is the fourth and final instalment of the autobiographical series to be released in English.

In this collection of comic strips, as in the previous three, Delisle, a stay-at-home dad, makes some questionable parenting decisions involving his children, Louis and Alice. In this final book, Delisle’s children are obviously older, and as life would have it, both children have developed their own interests. In the book’s opening strip, Delisle finds himself away in a dreary hotel room and calls his kids for company and to tell them that he has bought them a special treat. But Alice wants to talk to a friend and Louis is playing a video game. Feeling rebuffed, Dad grumbles and eats the treat himself. 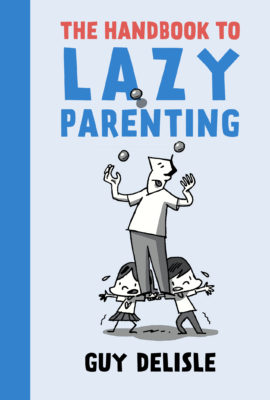 Most adults would admit to using some form of flattery to get their children to do the things they are reluctant to do. But like most kids, Louis has picked up on this tactic and uses it to his advantage. Upon receiving a note for bad behaviour in his assignment book, he needs a parent’s signature and opts for the easy one – his father’s. When asking him to sign, Louis tells his father that the teacher is out to get him. Having had a similar teacher who hated his doodling, Delisle says that he can relate. Then, Louis strategically points out that Delisle won best comic at Angoulême, France’s premier comic award. Momentarily chuffed, Delisle dismisses the note and signs, but later must explain the signature to his wife.

Good parenting is a virtue the world over, but at times our own competitive nature can get in the way of the child’s best interest. When Delisle goes on Alice’s school trip, he is unable to control his urge to answer the teacher’s questions. Although the teacher politely and repeatedly points out that the children are to answer, Delisle simply cannot resist. At the end of the day, he asks if there are any more trips. The teacher replies, “No, none.”

My favourite strip in the series is Alice’s audition for the conservatory. Dad has the task of getting Alice ready for her audition and encourages her to stay calm. However, he thinks out loud and realizes that if she doesn’t get in, they would have to pay for private lessons and that would cost an arm and a leg. The realization sends Delisle into a tizzy. After a miscalculation of time, Dad is in a full-blown panic attack, while Alice remains calm. Then in his final fatherly duty, he insists that she blow her nose. He holds a tissue and instructs her several times to blow harder. When the pair leaves, Dad tells Alice that first impressions count, unaware that snot that was meant for the tissue is now on the front of his sweater.

Delisle’s many years of cartooning experience comes through in this collection, particularly in the timing of his punchlines. He also skillfully makes his characters look active, and their expressions and body language correspond perfectly to what is being said in each frame. There is a pared-down quality to his art, but there is just enough detail in his panels to still draw the reader into the moment.

Although I prefer Delisle’s travelogues for their depth and story, this final instalment of the “Bad Dad” series will definitely appeal anyone who likes the funnies section of the newspaper or needs some comic relief from parenting. Even though this instalment is not the funniest in the series, the heart-warming final strip more than makes up for it. Some warm fuzzies are guaranteed. mRb