The History of Montréal

A review of The History of Montréal by Paul-Andre Linteau

Modern Montrealers mortified by the current corruption at city hall might be mollified to learn that we’ve been through all this before. An inquiry in 1909 found favouritism and corruption among city politicians, and another, in the 1950s, blamed crooked cops and councillors for the city’s rampant gambling and prostitution. 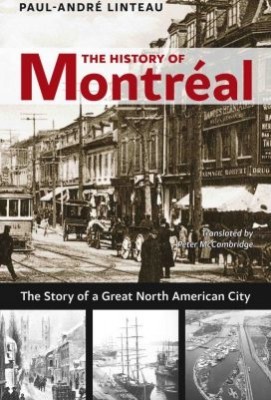 Bad behaviour and incompetence are recurring themes in The History of Montréal, a well-written, tidily organized survey of the city’s history. But so are idealism, imagination, hard work, and accomplishment. A city, it seems, is a reflection of human nature. You get the bad with the good, and, at different times, different attitudes rule.

If Montreal is a reasonably well-to-do regional centre now, it was once the biggest and richest city in Canada, the industrial capital, the commercial centre, the hub of transportation, as well as the home of the head offices of all the banks and big companies and railways.

The decline began during the First World War when so many scions of Montreal families, the future leaders, were lost. Then the wealth of North Ontario’s Mines flowed not to Montreal but to Toronto, kick-starting the upstart city’s rise. Quebec nationalism beginning in the 1960s accelerated Montreal’s decline. And by the 1970s, Vancouver had overtaken Montreal as Canada’s biggest port, and Toronto sat unchallenged as Canada’s new biggest and richest city.

In the beginning, the real beginning, centuries ago, probably millennia, there was a Native village where Montreal would rise, a complex of longhouses surrounded by a stockade and vast fields of corn. The French settled in 1642, initially a religious outpost, soon a fur trade capital. The English took over in 1760 and British immigrants poured in. For much of the nineteenth century, Montreal’s population was majority English.

Yet for a place that was French or French and English for its first 250 years, the city today is thoroughly cosmopolitan. European Jews came in number in the late nineteenth century; Greeks and Italians, in the twentieth century; Arabs, Asians, and Latinos, today. Recent immigrants have tended to stay in the city proper, while established Montrealers, like other North Americans, have been fleeing to the suburbs since the 1950s. And though Montreal is unquestionably the central metropolis of La belle province, barely half the residents in the city proper today claim French as their mother tongue.

There are interesting facts on every page of The History of Montréal. At less than 200 pages, it is strictly a survey. But it covers the trends and developments, the struggles of the early colonists, the comfortable French town of the mid-eighteenth century, the rapid rise of the Anglo-Scots in commerce and society following the Conquest, the eternal chasms between rich and poor, the equally eternal (until quite recently) presence of the Church, the trials of the Depression, the glory days of Expo 67, and much else, plus how each fits into the continuum of Montreal history.

Author Paul-André Linteau, a history professor at UQAM and a busy writer on Montreal history, is good with dates and figures (shifts in growth rates and population say so much about how a city is doing), and is fair and calm in his approach – perhaps too calm at times. In his chapter on language laws, he states that various bills were passed and barely hints at the passions unleashed, saying only that “the effects would be felt for years to come.”

On that subject, Linteau notes that the traditional French-English nature of Montreal, each solitude with its own attitudes and institutions, its own elites and impoverished, causes its share of challenges and excesses. But, he concludes, “something special sets Montreal apart, no doubt due to the French and English worlds it is home to. That’s what makes it such a fascinating city.”