The House on Selkirk Avenue

A review of The House on Selkirk Avenue by Irena Karafilly

Kate, the protagonist of Irena Karafilly’s The House on Selkirk Avenue, is overpowered by nostalgia upon returning to her hometown of Montreal for the first time in a decade. The past infuses her every thought, saturating her view of the city. She’s returned, ostensibly, to help her daughter settle in at McGill. But once there, she has no desire to leave, reluctant to go back to her life in Edmonton and to the marriage about which she is thoroughly ambivalent. A lifelong dilemma, as she says, is her “reluctance to surrender to the prose of life.”

Staying in Montreal allows Kate to indulge that reluctance. She becomes enmeshed in memories of her former life, lost in the throes of a love affair with a Francophone musician, Guillaume, that ended almost thirty years ago. Her return having brought this ancient heartbreak to the surface, it refuses to settle down and be neutralized. “Is there anything more seductive than our own past?” asks Antonia, whose home now occupies the space where Guillaume’s apartment once was, after Kate rings her doorbell. A stranger, Antonia is nevertheless quick to understand Kate, for she has indeed been seduced. 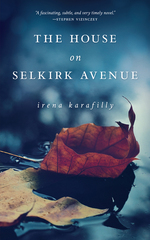 Quebec politics provide a backdrop for the story, but never become the focus – it just so happens that Kate’s relationship played out in the political turmoil leading up to the October crisis in 1970, and that those events had disastrous consequences for lovers who suddenly found themselves on opposite sides of a language divide. The novel presents a romanticized version of Montreal, one that quickly draws the reader under its spell. Karafilly’s skilful descriptions capture the city’s beauty, whether Saint-Denis Street in autumn, with its “fanciful gables and wrought-iron balconies trailing ivy and spider ferns, petunias and morning glories,” or Sherbrooke Street in a winter storm, when “the maple trees glitter in the light of street lamps.” It’s a nostalgia imbued with “the scent of fading roses, the ticking of a grandfather clock; the clamouring past colliding with the adamant present” – one that anyone who’s ever loved and left Montreal may relate to.

Yet Kate’s present seems increasingly less adamant, and her past more insistent, until she seems to be living entirely within it. She avoids dealing with, for example, her failing marriage, and is also unready to confront the reality of her age; she constantly has to “remind herself that, whatever the mirror says, she is almost fifty years old.” Yet Kate shows self-awareness about all this, describing herself as “nostalgia-smitten” and “trapped in the murky tunnel connecting past and present.” She just doesn’t seem able to climb out from the hole she’s found herself in, fixating on the pain of her relationship’s dissolution, what she perceives as her great loss, “with the same perverse compulsion that occasionally makes the tip of her tongue seek out an aching molar.”

Kate is a photographer by profession, and her ruminations on the nature of photography offer some insight into her inability to let go of the past. “A photographer is a compulsive robber who cares far less about his or her subject than about the occasional chance to trap time,” she observes, and later describes photography as “a longing for permanence.” She used to believe that “she could never lose anyone if she photographed them often enough, attentively enough.”

The effect of being trapped in this character’s obsessive reminiscences can border on claustrophobic. But this obsessive quality is also what makes the narrative compulsively readable. With The House on Selkirk Avenue, Karafilly offers a richly seductive account of a love affair with and in Montreal, balanced by a realistic portrayal of a woman confronting middle age, obsessed with the passing of time. Readers who allow themselves to fall under its sway will be rewarded.mRb