A review of The Imposter Bride by Nancy Richler 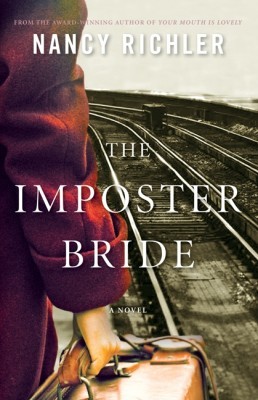 In an episode from the third season of Mad Men, the main character – a man calling himself Don Draper – experiences his greatest nightmare when his real name and backstory come to light. His wife (who makes the discovery) is appalled: “You’ve been lying to me every day,” she says. He tries to tell her he’s the same person she married, but his false identity proves too overwhelming a deceit for her to accept.

Why should names interest or even obsess us? Surely a person is more than a label. True, but a name provides a good starting point. As social animals, we like basic taxonomy: classifying who and what we deal with, especially in our most intimate transactions.

Montreal novelist Nancy Richler’s new novel, The Imposter Bride, creates a world that places front and centre questions of identity and the kaleidoscope of facts that comprise a human being.

A Holocaust survivor travels to Montreal, where she enters the most intimate of states – marriage and motherhood – under a false name. It turns out she lifted identity papers from a dead woman, one Lily Azerov, right after the war. Under that name, she becomes engaged to a Montreal man through the post. When “Lily” arrives at Windsor Station, the fiancé takes one look at her and backs out of their engagement. His brother marries her instead. They grow to love each other and have a child. When their baby, Ruth, is almost two months old, “Lily” takes her purse to go out for milk and never comes back.

Ruth grows up happily in two households, nestled in a loving and harmonious patchwork family comprised of a single father, a paternal grandmother, an uncle and his wife, three boys, and a mother-in-law. Scenes from this warm and busy life alternate with excerpts from the real Lily Azerov’s journal and flashbacks from various characters (sometimes confusingly).

The characters often mention trusting their instincts and drawing up rapid assessments of people and situations. For example, when they first meet, Ruth’s future husband predicts they will marry. In fact, the Holocaust backdrop suggests that survival can be contingent on being able to think quickly: figuring out a stranger’s actions and intentions is more helpful than knowing real names or personal details. At least initially. Once we incorporate that person into our lives, the whole truth does matter – very much:

A name is not just a sound that our mouths make. It’s an evocation. It’s bound to the life and soul of its bearer in ways that we don’t fully understand — that’s why we’re forbidden to utter the name of God … It’s not just out of respect—you understand?

With its folksy characters and Jewish-Montreal nostalgia, The Imposter Bride feels book club safe. Its depictions of charity and acceptance, though pleasing, ring false. No one curses the beautiful, mysterious woman who disrupts lives and commits the almost unthinkable act of child abandonment; indeed, there is barely a household squabble. Two husbands and one wife leave their spouses, but those left behind are unerringly faithful and kind, spouting wisdom not criticism. Ruth wonders about her mother for decades before searching for her, but in the interim she exhibits not a whit of neurosis or anxiety.

Overall, the award-winning Richler writes solid, evocative, well-paced prose. In Lily’s scant journal entries, Richler changes key and becomes more lyrical. It’s a shame the entire book was not written this way. She seems to have made a conscious decision to avoid narrowing the book’s appeal. Let us hope that in her next novel she trusts her readers to handle something more. mRb