A review of The Inheritor by Paul Almond

In 1990, Paul Almond (OC) retired from his career as a television and film screen writer, director, and producer and embarked on a new career path as a novelist. His Alford Family Saga is a series of eight historical novels chronicling the arrival of his ancestors in 1880 to the Gaspé region of Quebec, and their subsequent settlement there. Each novel follows a different male protagonist along the Alford family line and offers stories about personal struggle, overcoming the odds, and love set against the backdrop of historical events. The Inheritor – a roman à clef that begins in the 1950s – is the final in the series. Sadly, Paul Almond passed away this spring, just days after the release of The Inheritor.

In this lightly fictionalized account, we learn about protagonist Paul Alford’s early career as an innovator in television (at the CBC, the BBC, ABC, and Granada TV) and cinema. There clearly was too much ground Almond wished to cover and he appears to have written about as much as possible. The book has a quick pace that prohibits the development of an extended storyline, and it often feels more like reading a memoir than a novel. Rather than developing intricate storylines to illustrate the trajectories of his serious romantic relationships, for example, Almond named the three sections of the book after one of his partners at the corresponding time. In-depth details of the challenges in these relationships aren’t always overly divulged, yet the act of inscription is meaningful in its own right. It impresses upon the reader the place each woman held in his life. 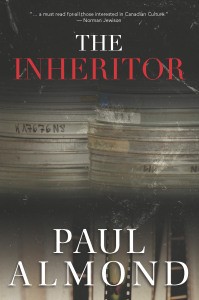 The Inheritor is a who’s who of mid-century Canadian arts set alongside the arrival of cultural institutions such as the CBC, the National Ballet, and the Canada Council for the Arts. The book is an illuminating depiction of another place in time that brings to life important figures from Quebecois and Canadian literature, television, cinema, architecture, politics, and music. Women whom Alford encounters throughout the novel, in professional and personal circumstances, are described immediately by their physical appeal (this also occurs occasionally with men). This usually comes across as a form of endearment or reverence, but the consistency with which this is done has a jarring effect when other aspects could have been explored or highlighted instead.

It is evident that Almond valued storytelling and the arts, documentation, and archiving as well as collaboration. In fact, the book itself is dedicated to Almond’s many colleagues and features an index of their names and achievements. This underlines the importance Almond placed on the production of Canadian culture. But the novel is not without critique. He suggests the bureaucratization of the CBC was a major contribution to its decline.

In the afterword, Almond acknowledges that readers may quibble with the form of the book. However, his stated intention was to create a finale to the Alford Family Saga. For the clarity of this vision, he succeeded in what he set out to do in writing The Inheritor. It documents his place in the world as an artist – constantly on the move, occasionally frantic, pioneering, and inspired. Observing the considerable contributions Almond made to Canadian and North American culture throughout his career, it must be acknowledged that he did so with open exuberance. Almond has put his familial and cultural inheritances to enduring use. The Inheritor is a loving portrait that stands well if read on its own or as part of the Alford Family Saga. The novel is a warm dedication to all those with whom he created. mRb