The Alchemy of Words

The Island of Books

A review of The Island of Books by Dominique Fortier

On the second page of Dominique Fortier’s novel, The Island of Books, an unnamed narrator explains the origins of the French UNESCO world heritage site Mont Saint-Michel: in the sixth century, two hermits living on the mountain built two small chapels. The hermits’ aversion to humanity meant the villagers below sent up a donkey carrying provisions. According to legend, a wolf consumed the donkey, then replaced it and continued bringing sustenance to the hermits.

Like this introduction, The Island of Books, translated into English by Rhonda Mullins, undulates between present and past, fact and fiction, faith and the fantastical. The book’s narrator is a writer living in contemporary Montreal. We learn that throughout her life, she’s visited Mont Saint-Michel twice. Now, she’s writing a novel set in the fifteenth century within the walls of the monastery: Éloi Leroux, an illiterate and highly skilled portrait painter, is mourning the death of his lover, Anna. Éloi is invited by his cousin Robert to recuperate in the isolated rocky outcrop, which turns into an island whenever the tides crash into shore.

However, the narrator admits to forgetting her notebook – tucked into her daughter’s stroller – out in the rain. We, as readers, hold in our hands something that is “half novel, half field notes, an aide-mémoire.” The narrator’s notes and journal entries bleed into the novel itself, and we are left to navigate the portions of text that have survived the storm. Fortier does a remarkable job of creating the illusion that the surviving segments are random glimpses of the waterlogged remains. In fact, there are times when it takes a moment to register if a particular passage is set in the past novel or present aide-mémoire. Taking a step back, it becomes clear that Fortier is always leaving subtle reminders that the narrator and the novel are intimately linked. 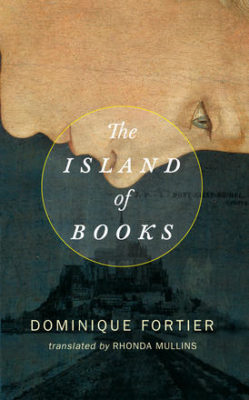 The Island of Books
Dominique Fortier
Translated by Rhonda Mullins

Whereas the narrator frequently dissects words through brief forays into etymology, the illiterate Éloi cannot read the passages he’s asked to recopy in the scriptorium, where monks toil endlessly to preserve the sacred with ink. Instead, he sees life through colours that have not yet been named: egg yolk tempera and charcoal. In Éloi’s world, tapestries and the edges of maps are populated by monoceroses, basilisks, and centaurs. Contemplating the challenges of motherhood, the narrator explains that she is writing to find herself again, that she writes in piecemeal fashion while her daughter sleeps. She notes, “This book is a room of my own.”

Learning about these two characters in fragments and ephemera, it can, at times, be a bit challenging to connect with them and to get a complete sense of who they are. However, Fortier’s prose is intricate and precise, especially when describing beauty through visceral language, such as when Éloi realizes how he should have painted the tears of his deceased lover: “one by one tear the silver scales from the backs of the fish, break open the oysters to scrape out their nacre, hollow out the eyes of birds that see the sky from on high.” The island of books – its cloisters, scriptorium, almonry, and ossuary – and the mystery it inspires are wholly engrossing and vivid.

Concerning the difference between Éloi’s lack of faith and Robert’s belief in divine providence, the painter remarks that they were “living in two separate worlds that connect only in appearance.” Perhaps the same can be said of the story’s narrator and Éloi himself: one is slowly regaining her footing as a writer, the other is incapacitated by a staggering grief. And yet, Fortier binds them with an alchemical devotion to both the shape and meaning of words on a page.