A review of The Lamppost Diary by Agop J. Hacikyan 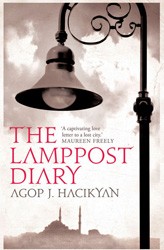 In his fifth novel, Turkish-Canadian writer Agop J. Hacikyan constructs a loving portrait of life in Istanbul during the mid-twentieth century that sadly misses the mark as often as it hits it. Written in the third person, yet with a distinct journal-like quality, The Lamppost Diary is a rambling episodic tale. Hacikyan meanders into descriptions of people, places, and events that he introduces and then aban- dons with no concern for toeing a cohesive storyline.

What is meant to hold the descriptive vignettes and flashes of history together is the coming-of-age story of Tomas, an Armenian-Turk, whom we first meet as a young boy in the initial days of World War II. The uncertainty of the times and the shadow of the Armenian genocide that occurred decades before hover over young Tomas’s world. When his younger sister dies after an accident, he learns first hand about loss and the lies parents tell to protect their offspring.

Nothing is certain for the young protagonist except for the green lamppost that he circles three times as a ritual before going to school. There may be some cultural significance to this, but the reader is not let in on it. Instead, we are tugged through young Tomas’s life in the same haphazard way a toddler pulls a wooden toy, sometimes easily and other times with a jarring jerk.

There is also a sense that there are similes and odd word patterns that have been transposed from another language: “…skinnier than the shad- ow of a piece of macaroni” and “In spite of his fatigue, he read with a certain homely energy…”

Young Tomas has three boyhood friends, characters that are never fully developed but instead moved around like scenery to illustrate an incident or demonstrate camaraderie among minorities. Together, the boys take themselves seriously enough to try and blow up a corrupt politician’s car with a pipe bomb, but the incident is eclipsed in importance by their earnest efforts to lose their virginity in a brothel. The background on Navsika, the prostitute who sees it as her mission to service young boys, is thorough, and like many of Hacikyan’s characters, she charms us before casually disappear- ing from the book.

It takes almost half the book to find anything resembling a plotline. During this first half, we are privy to Tomas’s forced circumcision, his sexual awakening, his loss of virginity, and detailed descriptions of Turkish discriminatory policies aimed at non-Muslim citizens. In the second half, however, the romance between Tomas and Anya, the beautiful White Russian girl he becomes infatuated with while they are still children, blossoms into a love story.

At the top of her class, Anya is as bright as she is beautiful. Upon graduating, she wins an American scholarship to study medicine at John Hopkins University, giving Tomas yet another compelling reason to leave Turkey. But Tomas, unlike Anya, has trouble succeeding on a number of levels. The harsh Wealth Tax imposed by the Turkish government on Armenians, Jews, and Greeks at the end of the war impoverishes his once well-to-do family. A long distance runner, Tomas comes in second in an important race and misses the opportunity to represent Turkey at the 1956 Olympics in Melbourne.

Although the first half of The Lamppost Diary covers only about five years, once the love story becomes the novel’s focus, the action leaps through time as if racing to a finish line. Like Tomas after his competitive run, the novel does not come home a winner. mRb