A review of The Last Bonobo by Deni Béchard

The Last Bonobo is a brilliant book, exactly the kind of intellectually powerful, clear, and compassionate account that could – literally – help save the world.

Deni Béchard knows how to write. Winner of the Commonwealth Writers’ Prize for his novel Vandal Love and author of the memoir Cures for Hunger, he deftly presents big ideas with lucidity and a total lack of condescension. In The Last Bonobo, he does a beautiful job of explaining the evolution of homo sapiens and our near genetic cousins, the other apes, in the context of the geologic and environmental history of central Africa. He also navigates the complex colonial and postcolonial histories of the region with sensitivity and skill, including catastrophic wars in neighbouring Rwanda and Uganda, skating lightly over the horrors of the Congo’s history without letting anyone off the hook. A reader with no knowledge of the region’s history and politics may approach with confidence; Béchard makes it easy to understand
the course of events. 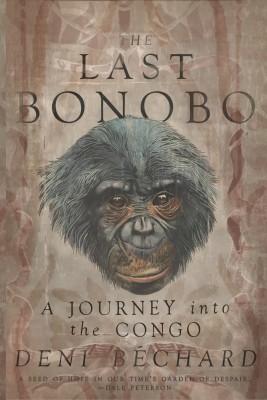 The Last Bonobo
A Journey into the Congo
Deni Béchard

The Last Bonobo is a case study in effective conservation, tracing the development of the Bonobo Conservation Initiative (BCI) led by Americans Sally Jewell Coxe and Michael Hurley. But the bigger and more important ideas that Béchard communicates so well are the values that make the BCI successful, and it is those values that, applied more broadly, could be world-changing. Unlike big, well-funded conservation groups like the World Wildlife Fund, which have heavy administrative structures to support, BCI is small and nimble, spending scarce funds doing conservation on the ground. Béchard emphasizes the time Jewell Coxe and Hurley spend cultivating relationships with those who live in the Congolese rainforest, deepening their understanding of the people’s living conditions and traumatic history, the culture that guides their relationship with the forest and its non-human denizens, their profound local knowledge. The book is full of lively examples, such as a spot on the Tschuapa River where bonobos had become so used to the human presence that they began to eat food from people’s fields. In response, the women planted “buffer crops” for the apes to eat instead.

Consistent with the respectfully collegial approach of BCI, which privileges the wisdom and work of local people as well as their needs, Béchard also offers eye-opening spotlights on BCI’s Congolese partners, among them Albert Lotana Lokasola and André Tusumba, extraordinary men who founded their own grassroots conservation organizations, often at great personal cost. One comes away with the urgent sense that we cannot afford to let the trees of the rainforest, with their vital oxygen-producing and carbon-sequestering capacities, be cut down – but as well the understanding that the forest is not just the trees; it is also the plants and animals, including bonobos and humans, whose existence is inextricably tied to that of the trees. Whether we know it or not (the Congolese know it) we live with the bonobos.

With a fine eye for detail, Béchard takes us through the rainforest with him. To dinner (caterpillars fried in garlic – delicious!), on the back of a motorcycle speeding across half-rotted plank bridges, to sit with a group of trackers beneath a tree full of bonobo nests (they bend and weave branches together to make “bowls” to sleep in). There, under the tree, he shows us how “Mama Sally” uses culture to bring creatures together: she breaks out a stash of power bars and trail mix and hands it out to her human companions. Bonobos, she explains, share food, and they like to see humans share food too. Sure enough, some curious bonobos appear to watch.

It is a privilege to join Béchard on his journeys, intellectual and physical. mRb