The Lava in My Bones

A review of The Lava in My Bones by Barry Webster

“I think a lot of Can Lit is about restraint,” Barry Webster tells me. “It’s this really subtle aesthetic where everything is presented obliquely and not directly.” The description doesn’t even remotely apply to his first novel. With The Lava in My Bones, Webster skips Molson and reaches for the absinthe; he ratchets up the volume on the dance floor until brains ooze out of ears; he burns down the highway in a spaceship at 20,000 miles an hour. His implacable style has inspired me to ply this Ontario-born writer with booze and pick his brain.

The story follows geologist Sam as he travels to Zurich for a conference on global warming, whereupon he meets the narcissistic artist Franz. Sam embarks on a watershed gay affair and the lovers take up rock eating. Meanwhile in Canada, Sam’s sister Sue begins excreting honey from her pores and attracts the attention of a swarm of local bees. Their fervidly religious mother struggles to save the souls of her children as their absent father chases mermaids. An escape from a psychiatric institution and a desperate cross-Atlantic boat ride later, Sam returns to Zurich to find Franz a thoroughly changed man.

“Restraint” is not the first word that comes to mind. The story is a tsunami of feeling made manifest in colourful landscapes and characters. Webster’s prose evokes an almost schizophrenic sense of possibility. To read The Lava in My Bones is to regularly bump up against sentences like, “every inch of the forest is covered with foot-high piles of semen that twinkle in the sun like manna descended from heaven,” or “the Earth’s core detonates, and lava shoots up through the planet’s vents and longitudinal fissures, blasting the tephra stoppers from volcano mouths as, on every continent, streams of torrid molten rock hurtle into the atmosphere.” Salmon sing the Hallelujah chorus and schools of dolphin flurry by in choir gowns. Sam crosses the Atlantic using his erect penis as a rudder. The novel addresses all manner of themes – climate change, love, gender, and the body – with considerably more ejaculations than in any other story I’ve encountered.

In sum: the magical punches are unrelenting. It’s refreshing to find a writer so dedicated to his approach. Webster paid multiple editors out-of-pocket to review the manuscript before finally securing publication with Vancouver-based Arsenal Pulp press. But if it’s true that emotions carry an inborn magic, it’s also true that what makes magic powerful is its contrast to the real. It’s a delicate balance and there are points when the absurdity becomes so ingrained as to lose its potency. There’s something to be said for the García Márquez way: spending a couple hundred pages developing a character and then having her quietly fly away as she’s hanging laundry. 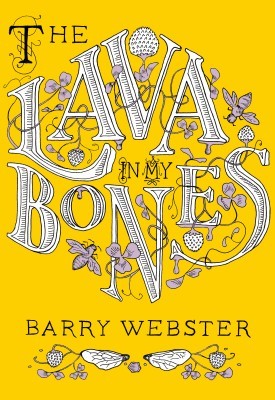 The Lava in My Bones
Barry Webster

Webster explains the increasingly feverish imaginativeness as a necessary progression in the narrative: “You have to keep constantly adding things. You can’t just suddenly drop the magic elements.” He continues, “It’s hard to balance reality with fantasy. It’s like a parallel railway track running all the way through. It’s way harder than realism.” He pauses. “It’s way, way harder.” I smile sympathetically and buy him another beer. We agree that reception to his novel will likely be quite polarized.

Hard to say what’s next, but Webster’s steadfast refusal to temper the force of his imagination has created a unique voice with a refreshing absence of self-consciousness. In the parlance of our times: he’s a writer to watch.  mRb