The Legacy of Tiananmen Square

A review of The Legacy of Tiananmen Square by Michel Cormier

Several years ago, a Chinese newspaper found itself in hot water after a young employee authorized the publication of a text written by the Tiananmen Mothers, a group dedicated to preserving the memory of the Tiananmen Square victims. So complete was the silence surrounding the events of June 1989 that the employee had no idea that mentioning Tiananmen was taboo.

If, for Westerners, Tiananmen is synonymous with the violent suppression of democracy, this is not so for people living in China today. Citing this example of effective state censorship, journalist Michel Cormier suggests that prospects for democracy remain dim nearly twenty-five years later.

In The Legacy of Tiananmen Square, fluidly translated into English by Jonathan Kaplansky, Cormier asks why democratization efforts in China have repeatedly failed. Looking back at a century of Chinese history, he argues that each contemporary leader “has felt the need to sing the praises of democracy even though his actions were steeped in authoritarianism.” Mao lambasted parliamentary democracy for enabling the continued oppression of the working class by the bourgeoisie, even as he cracked down on political opponents. Deng Xiaoping, the leader who called the army in to Tiananmen Square in 1989, argued that his “socialist democracy” represented the collective interest of the Chinese, if not their individual rights. 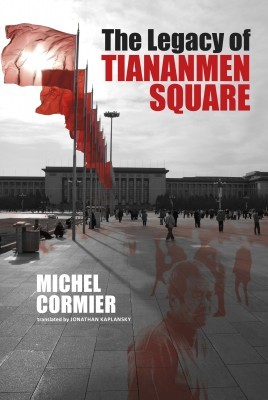 Authoritarianism has been challenged continually, and Cormier tracked down five prominent figures in the democracy movement to record their experiences. The resulting interviews add a welcome human element to what is otherwise an informative but rather dry overview of recent Chinese political history. It is fascinating to read Wei Jingsheng’s reflections on the radicalizing effect of living through the Cultural Revolution and observing the chasm between Communist discourse and widespread rural poverty. In an inflammatory text entitled “The Fifth Modernization,” Wei argued that Deng Xiaoping’s economic modernization program was meaningless without a fifth component: democracy. This stance resulted in lengthy imprisonment, followed by exile.

The majority of the book, however, focuses on the figures at the top of the Chinese power structure rather than on those agitating for change. As the CBC and Radio-Canada Beijing correspondent between 2006 and 2010, Cormier surely accrued significant inside knowledge of China, and one might have expected him to draw more from this experience. His account would have been strengthened by interviews taken from a wider cross-section of Chinese society, or by a more comprehensive examination of post-Tiananmen attempts to demand democracy. One group that might have merited a closer look is the Tiananmen Mothers, who have persistently challenged the official narrative surrounding the June 1989 crackdown. The publication of Charter 08, a pro-democracy manifesto, could also have been discussed in greater depth. In fact, one of Cormier’s interview subjects, Bao Tong, was involved in its creation; it would have been interesting to hear his reflections on participating in this courageous initiative while living under police surveillance.

Cormier’s central argument – that Tiananmen’s legacy was the entrenchment of authoritarianism – is nonetheless persuasive. When the government decided to clamp down on the student movement, it simultaneously cracked down on dissenters within the Communist Party. Cormier concludes that in this repressive political climate, activists have shifted their focus toward what he calls “citizens’ rights” – the right to clean water, education, fair working conditions. Han Dongfang, a workers’ rights advocate and veteran of the Tiananmen protests, believes that these struggles are essential steps in creating accountability, if not liberal democracy: “What will lead the government to be more responsible … is not the government. … People have to be more confident and push; that is what is happening in China. With time, the Chinese government will have no choice but to change, to become a more responsible government.” mRb