I didn’t lay a finger on her.
I didn’t hire anyone.
To sneak in and murder her. And yet it’s as if.
I killed her.

With these opening lines we are drawn into Jennifer Tremblay’s Governor General’s Award-winning play The List, the compelling story of one woman’s struggle to come to terms with her overwhelming guilt in the face of the tragic death of her friend.

Originally written in French, the play is beautifully translated by Shelley Tepperman. For those who have seen the play performed in French, reading the English text provides additional insight into the character without sacrificing the clear voice of the playwright. Furthermore, the book includes added segments written by the author for the English version especially.

The List is a one-person play. It is set in present day in a small village in the remote Quebec countryside. The only character, a woman in her midthirties, delivers the text from her immaculate kitchen. She interweaves the telling of how her friend Caroline died with the details of her ongoing to-do list, hence the title. 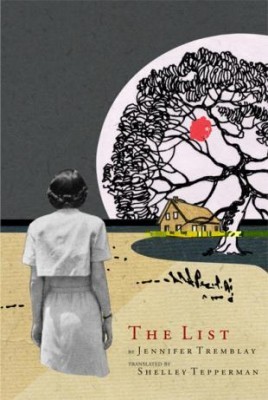 Caroline dies of complications related to childbirth soon after delivering her fifth child. The narrator feels responsible for her death because she hadn’t placed the right amount of importance on giving Caroline her own doctor’s phone number.

In one-person shows, the following question presents itself: whom is the narrator talking to? The answer can vary. Sometimes it is themselves, sometimes it is God, and sometimes
it is an invisible second character, like a friend or a dead relative. And sometimes, as in this case, the nameless narrator of the piece seems to be talking directly to the audience.

Another question that is commonly asked of playwrights is “what does this character want?” As Jennifer Tremblay explains in her Afterword: “The List is to my mind a long, unending question, although one that is never explicitly formulated: ‘In your opinion, ladies and gentlemen, am I culpable in my neighbour’s death?’” If this is what she is asking, then one could venture that what she wants is to be granted forgiveness. But even then will she be able to forgive herself?

“Find doctor’s phone number.” I didn’t treat that task properly. I should have dealt with it right away. No question. It was urgent.

Certainly, there are others who appear to be more immediately responsible for the tragic death of Caroline; primarily, the doctor who delivers the baby and cuts her artery. The fact that Caroline dies of complications due to childbirth is shocking. In these modern times, we do not expect women to die in childbirth. Thus, we can forgive the narrator her failure to “Find doctor’s phone number.” We understand how the task could have easily been relegated to her less urgent list, especially when up against the myriad of other things listed. As the narrator says: “I didn’t understand her panic./There are doctors on every corner./It’s the twenty-first century.” The narrator’s neglect of this task becomes less understandable when she describes Caroline as being really afraid, as starting to panic. To find the doctor’s phone number is clearly a priority for Caroline, one that the narrator recognizes and fails to act upon – not, albeit, out of any malicious intent. Only does that matter? In the end, Caroline is dead and her death could have been prevented, perhaps by finding the doctor’s number. This is the crux of the play.

In many ways, the unnamed narrator is easy to empathize with: it is sometimes difficult to be able to distinguish between the urgent and not-so-urgent tasks on our lists. It all seems so important: daily and monthly chores, groceries, errands, and appointments. It all seems urgent until something happens that forces us to stop making lists and start paying attention to our lives.

By the end of the play the narrator has only one heartbreaking unattainable item left on her list: Bring Caroline back. mRb

Alexandria Haber is a playwright, dramaturg, and actor. Her plays have been produced in Montreal, Winnipeg, Calgary, Edmonton, and the UK.