The Little Fox of Mayerville

A review of The Little Fox of Mayerville by Éric Mathieu

Éric Mathieu’s The Little Fox of Mayerville is a coming-of-age tale that follows the life of Émile Claudel, a young outcast born into a small village in France in 1945. Although he exhibits many of the traits of a burgeoning genius, Émile is brought up in a traditional home where children are meant to be seen and not heard. His verbosity incites the wrath of his mother, France, whose resentment of her son begins from the first moments of the arduous labour that brings him into the world. Told through a series of vignettes of varying lengths comprised of both prose and poetic verse, the novel offers an intimate glimpse into the mind of a young boy who yearns to belong.

France is relentless in her cruelty, refusing to refer to her son by name, instead employing a series of pejoratives, among them, the Little Fox. Though it was intended as an insult, Émile soon finds strength in this identity and embraces the characteristics of the wily, cunning creature, using his wit to survive amid his ever-changing circumstances. 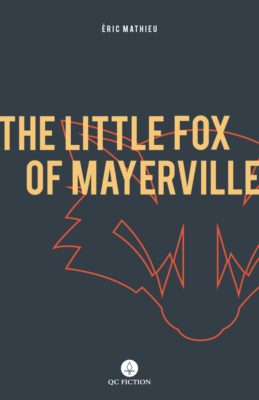 Émile’s father is cold and distant, doing nothing to defend the boy from his mother’s callousness. When Émile hears a rumour that his mother is suspected of having relations with other men in the village, he feels certain that his doubts about his paternal origins have been right all along, and begins to consider who his real father might be. By interrogating members of the Mayerville community, Émile seeks to gain a better understanding of his own family history. Secretly, he hopes to uncover some shred of evidence that might set him on a different course from his parents and save him from a life of despondency in the French countryside.

When he is just eight years old, his parents bring him to a boys’ home, a dreary residence that he manages to escape, fleeing into the woods and sustaining himself on pilfered vegetables from the gardens of neighbouring homesteads. After living on the lam for some time, Émile eventually ends up being recruited as a performer with a travelling circus, where he earns his keep by contorting himself into a form that others find pleasing, a survival tactic that has seen him through his entire life.

Émile’s journey of self-discovery eventually leads him away from the traditions in which he was brought up, and he finds a place for himself on the fringes of society. Along the way, he forms relationships with other outcasts, finding in them the love and acceptance he longed for from his family. The relationship between Émile and his childhood friend Max is one example of this –  the type of friendship that endures through shifts in time and space. The boys are separated when Émile is sent to the boys’ school, but when he returns to Mayerville, he and Max manage to pick up right where they left off.

The book is comprised primarily of snippets of Émile’s interior dialogue, which charms the reader with its candour. From a young age, Émile understands that his character and appearance are not widely accepted, and yet he perseveres, carving out a life for himself on his own terms. Although he encounters much resistance along the way, the Little Fox continues to outsmart his adversaries, harnessing his alleged flaws and using them to hoist himself out of his tragic circumstances.

The sparse prose and skilled translation by Peter McCambridge combine to deliver a narrative that absorbs the reader as it forges ahead with its steady, hypnotic rhythm, slowing every so often to deliver a heartbreaking blow. Mathieu succeeds in his conception of a real boy, one who feels things deeply, and whose acute expressions cut straight to the bone. mRb

Anya Leibovitch is a writer and translator based in Montreal. She has been featured in PeachMag and InWords Magazine’s anthology, Dis(s)ent, and is currently working on her first collection of short stories.