A review of The Long November by James Benson Nablo

April, it seems, is not the cruellest month. That would be November. That is, if we’re to believe James Benson Nablo’s protagonist in his novel The Long November. The latest book to be published under Véhicule Press’s Ricochet imprint, The Long November is a noir, gritty novel, but it’s not a mystery or a potboiler. It’s an anti-war novel, a rags-to-riches novel, a love story, and a coming-of-age story in oh so many ways. In short, it’s nothing you would expect.

It’s November. World War II is nearing its end. The first-person narrator, Joe Mack, is holed up in an abandoned house in Italy. He’s been shot in the shoulder – his ticket home, he reminds himself – but he can’t make his escape just yet. As Joe waits for the cover of darkness, different smells waft in, bringing forth the ghosts of Novembers past. The first ghost to appear is Steffie, a slight blond from the right side of the tracks with whom Joe fell in love in 1929. From that moment on, despite his not finishing high school and the start of the Great Depression, everything Joe did – from selling cars, to running liquor to the United States during Prohibition, to mining and gold prospecting – was for the purpose of making enough money to marry Steffie. 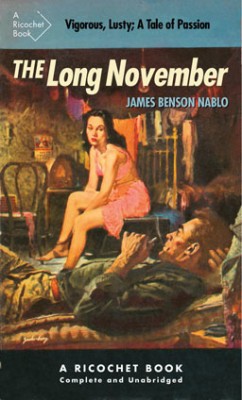 In a long, gripping monologue – either the final reckoning before his death or a means to keep himself awake and alert until nightfall – Joe revisits the different angles he used to make money, the people he met (including other women), and the dreams he had.

The tone of the narrator is very reminiscent of the noir genre and the dialogue can be a bit wooden at times (particularly when the interlocutor’s name is repeated over and over again), but the prose is astonishing. After all, how many noir novels quote “The Stolen Child” by W. B. Yeats? Whether Nablo is simply describing a scene (“I crawled back after the one last look. The squareheads were still messing with their barricade. At this distance, and if there’d been snow, they’d have looked like a bunch of kids building a snow fort.”) or waxing poetic (“A dream can go on being a dream just so long and then it becomes an ache, like the ache in your face when you’ve smiled too long at an old gag.”), his prose is stunning, fluid, raw, and realistic. Never more so than when he contemplates war and the stupidity of it all.

First published in 1946, The Long November was reprinted six times in nine years, making it one of the best-selling Canadian novels of the post-war period – a best-selling novel that nobody has ever heard of. Now, sixty-seven years later, Nablo is back on our bookshelves, and we should never forget about him again. mRb