A review of The Lost Sisterhood by Anne Fortier

While I was growing up in the 1950s, the only female superhero around was Wonder Woman, an Amazon with bracelets that could deflect bullets. Today, with Katniss Everdeen of The Hunger Games holding readers young and old in thrall, it’s high time the Amazons took their rightful place in the pantheon of empowered women. Anne Fortier, author of the New York Times best seller Juliet, rises to the challenge.

The Danish-Canadian writer’s hefty new novel, The Lost Sisterhood, skilfully weaves a mesmerizing tale of two women – one modern and one mythological (or maybe not) – replete with intrigue, twists, and turnarounds. If you were pitching this story to a producer, you’d say, Dan Brown meets Danielle Steel via Margaret Atwood.

he Amazons, women warriors of Greek mythology, fascinate Oxford philologist Diana Morgan, a curiosity that was seeded by her grandmother who believed herself to be one. Diana’s parents, however, believed Granny was mentally unstable. Before they could have her institutionalized, Granny disappeared. Some time later, Diana receives a package in the mail: an exercise book with the alphabet of an ancient language and a jackal-headed bronze bracelet. 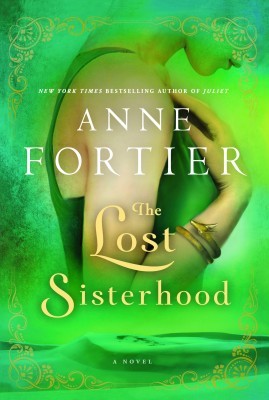 Approached by a mysterious foundation offering proof of the Amazons’ existence, Diana sees an opportunity to convince her skeptical colleagues. Despite her apprehensions, she leaves the backbiting world of academia and undertakes an odyssey into the realm of archeological digs, high intrigue, and raw brutality. In North Africa, she reluctantly teams up with Nick Barràn, an irritating and illusive character who is alternately friend and foe. He delivers her to a buried temple in Algeria where she discovers the same symbols she found in her grand-mother’s notebook and the story of the first Amazon queen.

In parallel to Diana’s story is the tale of a determined young huntress, Myrina, who flees her devastated village with her blind sister, Lilli. They survive a desert crossing and reach the mythic Lake Tritonis where they join the priestesses who serve the Goddess of the Moon. The temple is attacked and looted by Greek marauders, led by Orestes, son of the powerful king Agamemnon. A number of the priestesses, including Lilli, are abducted. Determined to rescue all of her sisters, Myrina and her remaining band sail to Crete, where she meets Paris, heir to the throne of Troy; he helps her raid Agamemnon’s palace where she liberates her sisters. What follows is Fortier’s brilliant revision of an ancient myth.

Like a high-speed chase, Fortier criss-crosses the two women’s stories at a breakneck tempo as Diana and Nick follow the trail of Myrina and the Amazons from Greece to Turkey to Germany and, finally, Finland. The evidence supporting the existence of the Amazons builds with clever feints and clues, keeping readers on their toes but sometimes inducing a bit of head-scratching. Why does Diana have to explain the legend of the Minotaur to Nick, who has been working as a guide on archaeological digs? And why the brief prologue that describes a college student receiving a baby in a basket (an event that is totally forgotten by the book’s end, 700 pages later)?

Of the two odysseys, I much prefer Myrina’s story: despite its mythic roots, it rings truer and is richer than Diana’s travails in tracking Granny’s jackal bracelet and the Amazons. Of the two love stories, Myrina and Paris strikes a heartfelt chord, whereas the teeter-totter relationship between Diana and Nick feels too contrived.

Ultimately, The Lost Sisterhood is a swift and wonderful read; a book that is ripe for big-screen adaptation. mRb