The Lover, the Lake

A review of The Lover, the Lake by Virginia Pesemapeo Bordeleau

Cree-Métis artist, writer, and poet Virginia Pesemapeo Bordeleau first published The Lover, the Lake in French, under the title L’amant du lac (Éditions Mémoire d’encrier, 2009). As with Bordeleau’s other books, this one has been elegantly translated by Susan Ouriou. The Lover, the Lake, published by Freehand Books, is largely recognized as the first erotic novel by an Indigenous woman in French. In its English incarnation, it is also now part of a burgeoning corpus of literary Indigenous erotica, including the likes of Without Reservation: Indigenous Erotica, edited by Anishnaabe writer Kateri Akiwenzie-Damm; Me Sexy, edited by Anishnaabe writer Drew Hayden Taylor; and #IndianLovePoems, written by Dene/Métis poet Tenille Campbell.

The Lover, the Lake follows a sensual and sensuous account of the relationship between Gabriel, a Métis poet, artist, and trapper, and the healer Wabougouni, of Algonquin and white origins. The novel opens with the arrival of Gabriel in her small Algonquin community. He navigates the tumultuous waters of Lake Abitibi, and, almost spent from the struggle, finds himself approaching the Quebec shore when he spots a cluster of women surrounded by children. As he beaches, his eyes first alight upon Wabougouni, and, for both of them, it is love at first sight. 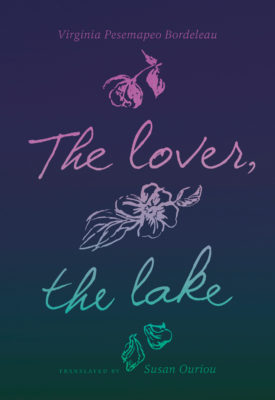 While he recognizes that she must be the daughter of a mixed marriage – her burnished red hair is a clear giveaway – it is only the reader who comes to learn of the history of violence that culminates in her eventual birth. He is, however, painfully aware that she is both married (to Frank McTavish) and pregnant. In addition, Wabougouni’s grandmother, Zagkigan Ikwe, is protective of her, a tendency that is heightened by the fact that she already tragically lost her daughter, Wabun, to a fever brought to the village by trappers when Wabougouni was only two; she knows that, once she and Frank die, “her granddaughter’s tenuous bond with the clan” would be further strained, and so she worries about how “Wabougouni and the child would face the future alone.” Zagkigan Ikwe thus sees Gabriel as a possible solution.

The histories of Wabougouni and Gabriel are similar, in their individual traumas and semi-ostracization from Indigenous and white communities alike. Even as these experiences do not define them, they render them more compatible. Their relationship is ultimately tacit, communicated through expressions and gestures, and physically consummated in a way that confirms a connection that transcends the limitations of language.

As the title suggests, the lake is as much a character in this novel as the two other protagonists, Gabriel and Wabougouni; their relationship is often characterized in terms that invoke and call upon its imagery. In their first physical encounter, for example, she is described as “flow[ing] over him, tender, and intense, sinuous, an aquatic plant swaying on the lake’s bed.” At other moments, in fact, it seems that the lake is as much a lover to Gabriel as is Wabougouni. So Bordeleau writes that “[h]e loved this water and the water loved the man. For now, he made love to the lake with his whole being, gliding deep inside while the expectant mistress remained silent […] His body parted his liquid lover, cleaving through to better delve inside.”