Our Most Celebrated Poets

The Metaphor of Celebrity

A review of The Metaphor of Celebrity by Joel Deshaye

The private self is arguably one’s most authentic voice, if only for the truth of what is expressed before any social filter is applied. The written word, however, “outs” the author, muddying the distinction between private self and public persona. What happens to the author who knows his or her most personal reflections will be paraded in front of the public and even celebrated by that public? What happens to the writing? And what exactly is celebrity?

These are some of the questions asked by Montreal author Joel Deshaye in his new book, The Metaphor of Celebrity: Canadian Poetry and the Public 1955-1980. In it, Deshaye examines the phenomenon of celebrity in the lives of four of Canada’s most famous poets: Irving Layton, Leonard Cohen, Michael Ondaatje, and Gwendolyn MacEwen. All writers whose poetry specifically deals with the effect of celebrity (real or imagined) on their work and on themselves. 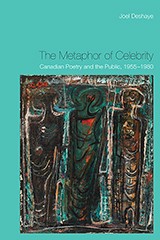 The Metaphor of Celebrity
Canadian Poetry from 1955-1980
Joel Deshaye

The period covered by Deshaye begins with the rise of television in Canada and ends in 1980 – a brief period, he suggests, when Canadian poets were at the centre of our literary culture. As Deshaye explains it, the CBC’s monopoly in the early years of Canadian television meant that when they chose to prominently feature Irving Layton, for example, he became a national figure.

But by the late 1960s, some of our best poets had, for the most part, given up on poems: Leonard Cohen was already better known as a singer/songwriter than as a poet or novelist, and Michael Ondaatje was foregoing poetry for collages of poetry and prose, slowly working his way toward the poetic novels for which he would become best known. Only MacEwen and Layton remained focused on poetry throughout their careers.

The early chapters of the book are about Layton, who often appeared on television, wrote extensively, sought out interviews, and became known as an outspoken and iconoclastic commentator on literature, life, sex, and the restrictive mores of the 1950s. When Layton entitled a book Lovers and Lesser Men, he interested some people, while infuriating and appalling others. The gain was that the public began to know his name, which meant that perhaps they’d buy one of his books, attend one of his lectures, or become a fan or an enemy of his work. He did this to such an extent that the persona he used to achieve celebrity began to cripple his own reputation. If one comes to be viewed as an argumentative womanizer, then what started as celebrity becomes a kind of personal straitjacket.

Deshaye’s analysis shows Layton to be much more. Beneath the persona is a careful craftsman who was often poignantly aware of the damage his handcrafted persona did to his much more thoughtful and perceptive private self.

Which (at least in a nutshell) is part of Deshaye’s point. Through the works of these four poets, he explores the strategies each took to interface with real or imagined celebrity. Layton looked to shock his 1955 public with the cock-of-the-walk strut of a very sexual being in the most repressed of times. Leonard Cohen explored himself as the victim of celebrity, which eroded the possibility of a private life and made the poet a slave to the accoutrements of fame. Michael Ondaatje’s strategy was to put himself at a greater distance as he examined how both celebrity and the private self impinged on core characters who were already famous: the outlaw Billy the Kid (The Collected Works of Billy the Kid) and, later, celebrated horn player Billy Bolden (Coming Through Slaughter).

A final and fascinating interface with celebrity is presented in the work of Gwendolyn MacEwen. In her book The T.E. Lawrence Poems, MacEwen attempts to understand and take on the character of celebrity by – at least in some sense – becoming the celebrated T.E. Lawrence of Arabia. This book has long been out of print, which is unfortunate because Deshaye has done some real detective work here. He points out that in her personal, annotated copy of this book – part of a collection at the University of Toronto – MacEwen underlines all the direct quotes she appropriated from T.E. Lawrence’s work, while in the book itself they appear without attribution, as if they were MacEwen’s own words, in forty-five of the book’s sixty poems.

The Metaphor of Celebrity is least interesting where Deshaye makes statistical arguments about exactly how many times each author showed up in which publication. But when part of the book’s thesis is the perceived celebrity of the poets under study, the step seems necessary.

In making his case that poetry can really suffer as a result of celebrity, Deshaye pulls no punches. Instead of a quiet and absorbing play with language and subject, the celebrated poet feels forced to frame each line as if it were spoken into a megaphone.

The American poet Tom Sleigh has argued that an important role filled by very creative people is their ability to communicate in a way that reflects their true self, By cutting away at the scaffold of the socially or politically correct, they allow us to contact and explore intimate, revelatory dimensions within.  Sleigh looks at the interface between self and personality, calling personality a social construct. Deshaye’s absorbing book can be read in the tradition of Sleigh, as an exploration of the next social construct – the one that poets and authors use to interface with an unknown public.

For whatever fame brings the poet, there are still those moments when the best thing in a poet’s life is the ability to explore ANYTHING with words, before the voice of self-criticism, social requirements, or the expectations of fans kick in.

Ian Ferrier is a poet and musician well-known for literary performance. His current collaboration — entitled For Body and Light (forbodyandlight.org) received superlative reviews at the Kraine Theatre in New York this winter and is currently touring cities in Western Canada. His next book of poems is scheduled for publication in French in 2015.