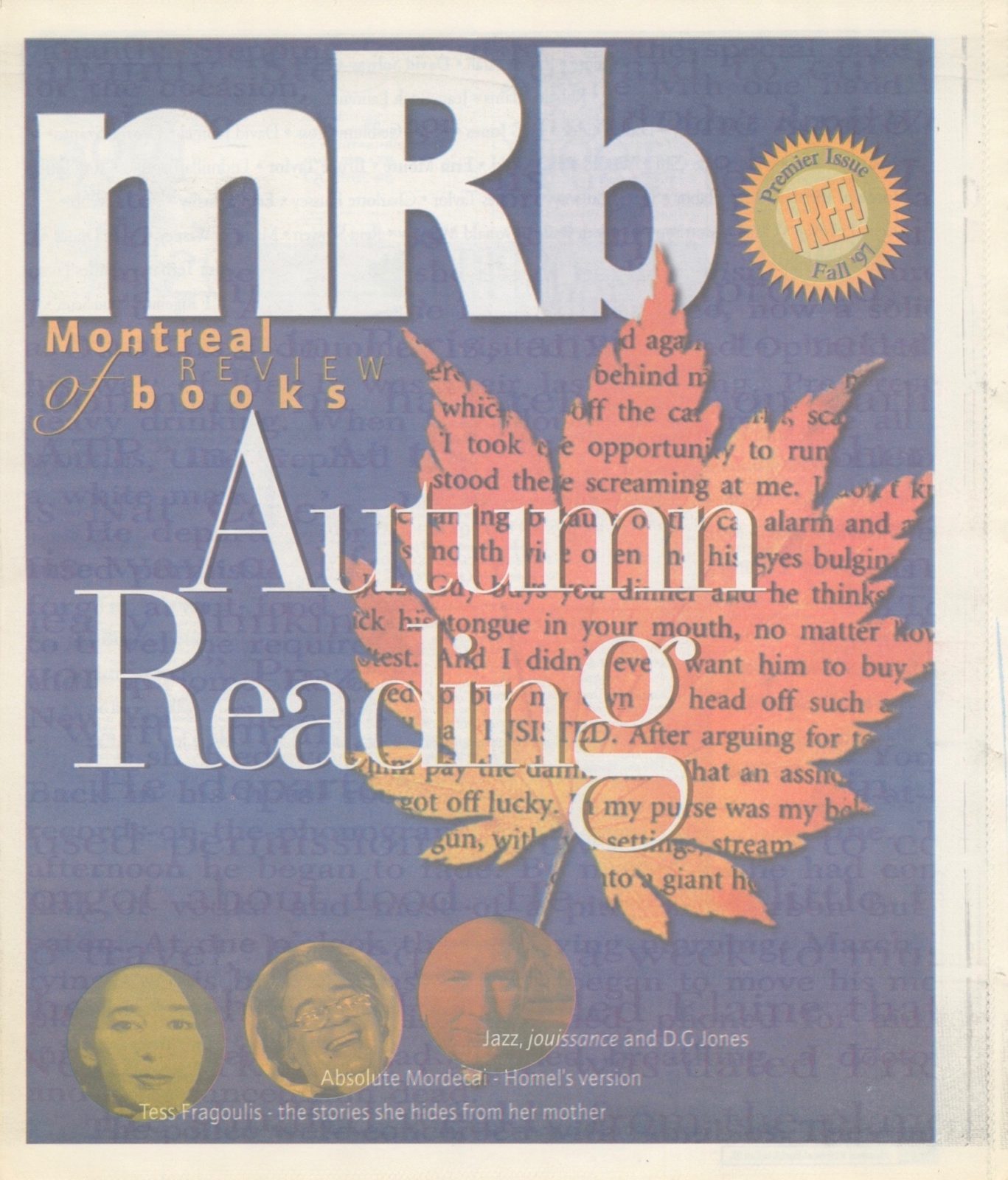 A Continuing Influx of New Voices

Back in the mid-1990s – when the internet was a quirky niche culture, only the very privileged carried cell phones, Montreal rents were a fraction of what you’d pay in any other major city, and local linguistic tensions were running high after the 1995 referendum – a group of local English-language publishers decided that the local Anglo literary scene could use its own publication.

“It was both a cultural and political act to make our presence felt,” recalls Endre Farkas, who at the time was co-president of the association that would come to be called AELAQ. “We felt that we had grown up – we weren’t just a bunch of people publishing odds and ends.” The review was initially called Allô Books, which Farkas calls “an inside joke” about the lurid Quebec tabloid Allô Police. After a few issues, the publication was shelved and rebranded as the Montreal Review of Books. “I suspect part of why it got transformed was that it was a more serious name,” laughs Farkas.

Kimberly Bourgeois was the founding editor of the Montreal Review of Books on its debut in 1997, working with a rotating editorial team. She describes the early days of the mRb with affection. “Back then, the editors worked on every facet of operations. We did everything from selling ads to coordinating distribution. Often, we hand-delivered bundles to local booksellers, strengthening our network.” The literary community was in transition from its old guard; Mordecai Richler was still active on the scene, and Bourgeois recalls putting a copy of the debut issue in his hands.

The mRb was a low-tech affair in this era. “I first used email in the context of this job,” Bourgeois recalls, “but in the early days, older technologies were still common. Something that takes a few minutes today could take up an entire afternoon. It was a huge amount of fun and wildly exciting, but a massive amount of work.” With the third issue in 1998, the mRb gained one of its most valuable team members, graphic designer David LeBlanc, who designs the print editions to this very day.

Starting with the seventh issue in 2000, Ian McGillis (who started as Bourgeois’ assistant) and Margaret Goldik ran the mRb as co-editors for nearly a decade. During this era, the city’s literary community and industry were changing and growing. “At some point in there, Montreal became a destination for aspiring writers,” says McGillis, who attributes this to the runaway success of then-Montreal-based Yann Martel’s Life of Pi (2001).

With more books to choose from, the mRb kept its ear to the ground for promising writers. “We were kind of a good-luck charm for some of the writers we featured,” says McGillis with pride. “We had a winning streak for a while where we would put someone on the cover, and then that person would win a major award while that issue was current. That happened with Jeffrey Moore – we put him on the cover when he was virtually unknown, and he won the Commonwealth Prize for Prisoner in a Red-Rose Chain, and we put Yann Martel on the cover before he won the Booker for Life of Pi.”

McGillis and Goldik moved on in 2008, succeeded by Aparna Sanyal; Mélanie Grondin was hired as associate editor in 2009, then the following year assumed the mantle of editor, which she held for the ensuing decade. Her tenure saw the introduction of an opinion feature called The Mile End Café, in which the mRb belied its genteel reputation with some sharply worded critical potshots, as well as the still ongoing illustration feature showcasing local visual artists.

Over time, the review has reflected more and more the diversity of voices in the community – not only cultural diversity, but also varieties of genre and opinion. “In my ten years at the mRb, one of the changes I noticed is an increase in the number of voices present in the Quebec English-language writing community – whether it be in terms of writers, reviewers, or publishers,” says Grondin. “Every issue, I was amazed by the number of books we would receive for consideration as well as the great variety of subjects, points of view, and experiences. Though we could only review a handful of them, I believe that we were able to find a balance in including the different voices that represent our community.”

The mRb also continued its streak of being an early platform for important writers. “I was proud to publish an essay by Robyn Maynard, about Black writing in Quebec, which we commissioned before she became known as one of Canada’s leading thinkers and writers on policing and racial justice,” says Anna Leventhal, mRb contributor since 2010 and publisher from 2016-2021.

Looking through the mRb’s archives, another major change is the rise of graphic novels (referred to as “adult comics” in the early issues) and particularly Drawn & Quarterly. In a 2002 profile, D&Q founder Chris Oliveros was still (after twelve years of publishing) running the business from his apartment, with one employee. Twenty years later, the publisher is an industry unto itself, releasing top-quality work from local and international authors and running not one but two bookstores in Mile End.

Probably the biggest change from our publication’s perspective is the sheer number of books being published locally. Both Bourgeois and McGillis describe a challenge in the early days of finding enough books to review; in recent years, we’ve had the opposite challenge. “It went from a situation where it was sometimes literally hard to find enough books to fill an issue,” remembers McGillis, “to, within maybe a few years, having so many more books and having to make difficult decisions about what we could review, which is a sign of a healthy literary culture that I like to think we played some part in.”

A relative newcomer to this venerable institution, I started writing for the mRb in 2015, was hired as associate editor in 2020, and the following year had the immense honour of being handed the mantle of editor from Mélanie Grondin. Our team is dedicated to continuing and expanding the mRb’s role for new generations of readers.

Life in Montreal, as everywhere else, is very different from twenty-five years ago: the internet has become indispensable in good ways and bad, only the very eccentric don’t have cell phones, and rents have gone through the roof (although strangely, salaries have not risen to match… but that’s a whole other topic). As for language issues – well, those seemed dormant for a while, but plus ça change… Still, our local literary community is thriving in both languages, and the mRb is still around to document our corner of the scene, celebrate it, and spur it on with healthy criticism.

Both Kimberly Bourgeois and Ian McGillis contribute to our pages regularly, along with other veterans and a continuing influx of new voices. “It’s been a quarter-century of a bewildering, shifting media landscape, so to have a magazine that not only has been around that long, but that has been recognizable for as long as it has, provides a trustworthy sense of continuity,” says McGillis.

“The vision I had initially was something that would last a long time, so it’s a joy to see that’s happened,” reflects Bourgeois. “It’s one of the most exciting things I’ve been involved with in my life.” We still feel that excitement about the mRb and local literature today, and we hope to continue sharing it with you in the years to come. Here’s to many more!mRb