The Mystics of Mile End

A review of The Mystics of Mile End by Sigal Samuel

In recent years, Mile End has endured more than its fair share of mythologizing. The supposed beating heart of Montreal’s artistic lifeworld, not to mention the first thing you think of when you hear “hipster” and “gentrification,” the neighbourhood is almost a caricature of itself, an imaginary Sesame Street dreamed into being by someone who reads exclusively VICE, Kinfolk, and Japanese post-rock blogs. Brave, then, for a writer to set her first novel in a place that more or less writes its own story. Especially when said novel deals with the neighbourhood’s orthodox Jewish community, itself the subject of many a hipster’s or yuppie’s consternation: Why won’t they make eye contact with me? What goes on behind those papered-over windows? What’s under those hats? 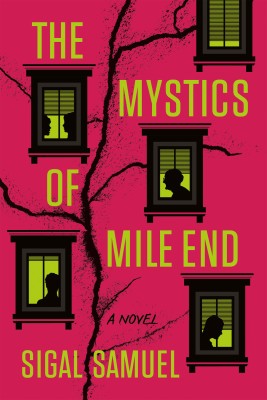 Sigal Samuel’s The Mystics of Mile End won’t answer those questions, but it will take you into the lives and minds of people who might. The three protagonists of this novel are people who hover at the border of faith, perpetually pulled towards it, and pushed away again. David, the father, rejected his parents’ secularism for his wife’s orthodox Judaism, then rejected blind faith for a life in academia, and finally found himself called to kabbalah’s shrouded and perilous doorstep. Samara, his daughter, follows a path mirroring her father’s. And Lev, the son, is pulled between the poles of his father, his sister, and his best friend Alex, a scientific-minded skeptic (who will himself encounter powerful forces beyond his control). Faith is the engine of this book, the force that puts its characters through their paces. They have a thirst for knowledge, and to quench it, they mix a volatile brew of fanaticism, skepticism, dogma, and spirituality. When it enters the gut, its effects are potent, even life-threatening.

Mystics is a well-paced novel that is judicious in how it reveals its characters’ inner lives. Samuel expertly lays clues and sets up promises that are fulfilled sometimes a decade (and a hundred pages) later: a boy peers through a telescope and into his future relationships; a fable of the Garden of Eden echoes through the mind of a Holocaust survivor, revealing its import only when it may be too late. Samuel’s ability with structure serves the story well and keeps the pages turning.

Samuel also does a commendable job of walking the fine line between the familiar and the Other. She doesn’t exoticize Hasidism or Judaism; neither is her portrait too close or too insular. In Quebec, “Hasid” often stands in for “Jew,” a synecdoche where symbols of devotion – black hats, hair-curls – replace depth or breadth. But the characters of Mystics are varied and complex: Hasidic Jews, misnaged (orthodox but not Hasidic) Jews, secular Jews, non-Jews who study kabbalah. There’s nothing homogenous or superficial about Samuel’s Mile End (except for maybe her hipsters, who form a tight-pant-clad backdrop of smirking and phone-checking). Mystics is an entertaining and poignant read, and also a welcome and sympathetic portrait of a world that for many of us is close and yet all too far.mRb