A review of The Orphanage by Richard Bergeron

Although the back cover of Richard Bergeron’s autobiography, The Orphanage, suggested the book would make for gloomy reading, it proved to be not only a page-turner, but also a delightful, light hearted, and entertaining account. Bergeron – Montreal city councillor, architect, leader of Projet Montreal, and advocate of sustainable urbanism – unzips his heart with a tone that alternates between dramatic and humorous while staying true to the story’s rawness. But humourous as the book may be at times, there’s nothing funny about being placed in an orphanage at the age of four, about scrubbing the refectory’s floor after each meal, or seeing the nuns strap bed-wetters on a daily basis.

The book takes place in the 1950s, a period when the Church had a say in almost every aspect of Quebec’s society. Precocious, the Alma-native author turns every painful situation into a lesson, resilience being the first. “I swore I would never be caught out again. And I wasn’t,” he writes after receiving his first and only strap for wetting his bed. Gratitude is another, “These nuns, the nice ones, really did exist. There were a few of them at the orphanage of Chicoutimi. And a few of them were a wonderful gift,” he recalls with fondness. Nevertheless, the main lesson Bergeron learns is how to stand out from the rest. “The question to ask myself was: What was important in their eyes? What would make them happy?” As though he knows that these sound like the words of a sycophant, Bergeron continues, “I had no choice. Like any child, I depended on the adults around me. But none of them were won over ahead of time.” It could be said that Bergeron’s early inference still governs his life today; now in his mid-fifties, the man is mostly sympathetically perceived for his community involvement. 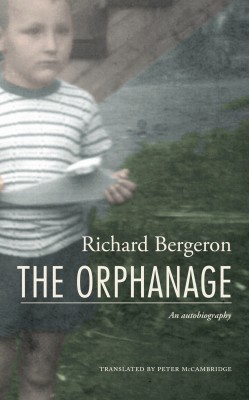 The Orphanage
An Autobiography
Richard Bergeron
Translated by Peter McCambridge

The style, though rudimentary and obvious, conveys the simplicity of a child’s outlook on life. When remembering the poor quality of the food, he describes “shapeless stews” made from “reform cattle,” which goes “into cat and dog food nowadays.” The chapter entitled “Routine” recounts heartfelt highlights that break a monotonous existence: the Saturday night movie, a flood at the orphanage, started by a rebellious boy left behind while the rest are at the zoo. Furthermore, amusing descriptions slice reality’s grayness in a masterful way, such as the one of the giant cooking pot – “the devil’s cauldron” – that spilled over on Bergeron, leaving him to convalesce for months in bed with third-degree burns.

A particularly touching part of the book is his memories of holidays and the happiness of a nurturing relationship with his grandmother. Ultimately, Bergeron unveils the reason for ending up at the orphanage in the first place: his mother was left paralyzed while giving birth to her fifth child. A construction worker, his father preferred to place his kids in a limbo state for six years rather than give them up for adoption to family members. Readers may look for a hint of bitterness or melancholy in these harsh truths, only to find none. Instead, it is the story of somebody who breaks through the thorns of struggle into the light. “What happened next? Life. Life happened next. Just life,” the book ends.

Half a century has elapsed since Bergeron’s stint in the orphanage and a question remains: is he trying to erase his emotional scars or does he simply want to admit their existence by sharing his experience? mRb

Oksana Cueva is a self-proclaimed world citizen. Writer, poet, and journalist, she strives to recreate with words what other- wise enters through the senses. Her coverage encompasses diverse artistic, literary, and cultural events.