Dark Side of Pink

The Pink House and Other Stories

A teenage daughter, aghast at the sight of her injured mother, whose face “has forgotten the shape of a smile.” An eighty-year-old grandfather, doggedly insistent on renewing his motorcycle licence so he can “be ready to drive anything, anytime, anywhere” to preserve his dignity and his waning independence. These stories will make you cry. In Licia Canton’s second collection of short fiction, generations of Italian-Canadians negotiate old-fashioned gender roles in a new country, sliding fluidly between different languages and cultures. Canton writes with profound empathy, conveying deep emotions and complex family dynamics through the memories, ambition, tenderness, and regrets hidden under the quiet surfaces of
her characters.

“Pink is not the colour of a real house,” declares the husband in the title story. The image calls to mind a little girl’s dollhouse, a romantic fantasy. But Canton’s characters are pragmatic people, juggling real-life responsibilities in present-day Montreal. These characters are modern and traditional, independent and interconnected, strong and weak. Pink may be a feminine colour, evoking romance, health, and hope, but it’s also the colour of embarrassment, of an exposed wound. 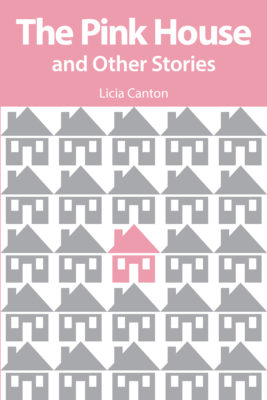 The Pink House and Other Stories
Licia Canton

In simple, straightforward prose, these fifteen stories explore the love and tension inherent in family relationships, particularly between different generations. In “Refuge in the Vineyard,” for example, the middle-aged narrator wanders through her parents’ acreage in Italy, desperate for a reprieve from her father’s constant criticism. Her resentment is soothed by her young son, who expresses the love and approval she craves. Their connection helps her accept her difficult family dynamics: “She may not be the most beautiful woman in the world, she may not be the smartest. But she is the most loved. By this little boy.” This bittersweet juxtaposition of pain and love is echoed elsewhere in the collection. As one character points out, “grandparents admire in their grandchildren what they objected to in their own children.”

Over and over, we meet men who embody the proudly macho Italian patriarch, the “dominant force” who stubbornly refuses to compromise or back down. In contrast, the women in these stories are dutiful caretakers, “always giving, never complaining,” patiently appeasing their domineering fathers and husbands. These women are at the heart of their families, “good at giving advice to others, picking them up off their feet, pushing them to go for it,” but never fully appreciated, always putting themselves last. Of course, this self-sacrifice comes at a cost. In “Soft Pastels,” the narrator reflects ruefully on the migraines she suffers, saying, “I am sure that if I did more of what I wanted, more of what I needed to do, then I would probably get fewer headaches.”

This self-denial becomes even more striking in the stories that deal with recovering from trauma. Like the narrator in nearly half her stories, Canton was seriously injured when she was pinned between vehicles in a freak car accident. Through her fiction, she processes this accident and its aftermath from a variety of perspectives, from the victim and her family to the negligent driver of the car and even his oblivious wife, each of their stories told with compassion and generosity. Even as she suffers, the injured narrator frets about inconveniencing others, worrying that her daughter won’t make it to her upcoming exams or that her fellow hospital patients might be bothered by the grinding of her teeth at night.

As characters work through unexpected setbacks to balance careers, dreams, and responsibilities, the “automatic writing” suggested by an art therapist becomes a metaphor for life itself. Describing a multigenerational family trip to Europe, one narrator sums this up succinctly: “This is not the story I had intended to write.” mRb