The Politics of the Pantry

Chilly mornings with high blue skies, golden afternoons with leaves tumbling into the wind – autumn has come to Southern Quebec, and, with it, an awakening need to prepare for the ice and snow to come. Against this annual backdrop of farmers’ markets teeming with the bounties of the harvest, local U-pick orchards opening their gates for apple lovers, and community Oktoberfest celebrations promising artisanal beer and sausages, we readily turn our thoughts towards local foods. It’s now that the possibilities and abundance are most tantalizing. Like many people, I take stock of future tastes and prepare provisions for the months ahead: I pickle vegetables, prepare apple and pear butters and sauces, and dry the remaining herbs in my garden for cooking and tea brewing.Yet also like others, I know that my family won’t have to rely on only these foods to see them through the winter.Which is why more purist local food experiments intrigue me. I subscribe to a year- round organic produce basket program; I buy locally raised meat, eggs, and dairy; I prepare from scratch and avoid convenience foods as much as I can; I seek out ways to purchase directly from growers and producers wherever possible. But I know I could do more to improve my food security (i.e., the availability of food and my access to it) and contribute toward environmental sustainability. I feel guilty that I could be doing more, but I can’t find the time to do it.According to Michael Mikulak, I’m not the only one. 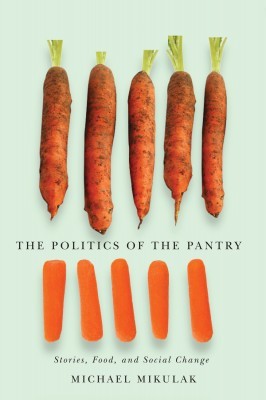 The Politics of the Pantry
Stories, Food, and Social Change
Michael Mikulak

As he relays in the third part of his book The Politics of the Pantry, Mikulak himself once delved into a year-long commitment to eating only foods local to his home in Hamilton, Ontario. He made goose sausage, nurtured a sourdough mother, grew vegetables in cold frames well past when many of us have put our gardens to bed for the year, laboured on a Community Supported Agriculture farm in exchange for a share in the produce, foraged for edible fungi, and preserved and pickled in such amounts that his very skin was probably infused with flavour. Now a career academic with two children and less time, he no longer eats so exclusively. He buys ethically to supplement that which he continues to grow in his garden, even while recognizing that “for those of us writing, reading, and eating from privileged positions, it can be difficult to reconcile the luxury consumption of artisanal, organic products with a politics of equal distribution and climate change.”

The purpose of Mikulak’s book is not so much to retell his struggles and triumphs with his food experiments – indeed, this personal narrative is but a small part of a text more concerned with critique – as to consider strategies for pushing against the dominance of economics to frame and explain food security and, by extension, the environmental crisis. It’s all too easy, he tells us, to feel defeated by a capitalistic system that seems so pervasive, both exploiting the earth through practices like the cash cropping of monocultures, and “offering” relief through measures and products that actually sustain the system (like certifiably organic, industrially produced foods that use greenwashing images and texts in their advertising to appeal to those seeking alternatives). Capitalism is the unwanted guest at the dinner party, begrudgingly invited and then resented for dominating the conversation. For Mikulak, the solution rests with local food:“I want to celebrate local food in order to save it from the ‘success’ of organics,” he says. His argument resonates with me: yes, this may be local food still purchased with dollars, but it’s without the middleman, and there is value (beyond the financial) accrued by reducing the distance food travels from ground to plate, by using barter opportunities to obtain food, by uniting with others in the community to process crops for use (as with a batch cooking get-together), and by learning indigenous and exotic skills to grow, handle, and prepare local foods. Small acts collectively yield change; it is the lack of will that impedes more than anything.

Because I devote so much time to acquiring and preparing food, it’s natural that I crave food- centered media. The Politics of the Pantry offers an analysis of many popular food texts, encouraging close readings in order to reveal their limitations and capacities to inspire real change.We see how Michael Pollan’s bestseller The Omnivore’s Dilemma, for instance, provides a convincing description of how corn has become the keystone of industrial agriculture; at the same time, the book “divides the world into obese victims and super-subjects such as Pollan, who can resist the power of the advertising regime.” Many familiar voices in the sustainable foods movement, like Carlo Petrini, Barbara Kingsolver, Jamie Oliver, and Gary Paul Nabhan are given similar treatment, revealing their varying usages of “utopian pastoralism” and “apocalyptic” fact reporting to make their cases. For Mikulak the most valuable narratives support the transmission of skills: DIY urban agriculture that is accessible to more segments of the population. From locavores will arise “a new beginning, a new set of value practices that contain the seeds of a better world.”

And that’s encouraging to hear reaffirmed – that we each have agency, that even with a jar of homemade pickles I’m feeding the effort. mRb